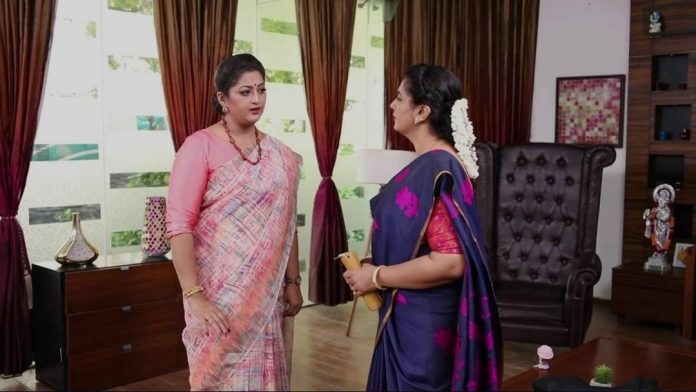 Vijay Television’s popular daily soap Tamizhum Saraswathiyum is all set for some interesting twists and turns in the story with Saraswathi warning Chandrakala to not try to break her family.
Previously it was seen that Saraswathi confronted Chandrekala. She told that Karthi had reconciled with Tamizh and her, so Chandrakala couldn’t be able to use karthi anymore against them. She warned Chandrakala for not trying to separate their family again.

Chandrakala fumed in anger hearing this. Later Kodhai and Natesan got happy to see Saraswathi and Karthi having a normal conversation. Vasundhara revealed the brave act of Saraswathi to save Karthi which changed Karthi’s heart.

Family admired Saraswathi’s bravery. In the office Karthi punished a senior staff when he made a mistake despite Tamizh’s trying to stop him.
In today’s episode it will be seen that Chandrakala will feel humiliated by Saraswathi and will fume in anger. She will express her anger and hatred for Saraswathi to Geetha, Tamizh’s aunt. She will want desperately take revenge from Saraswathi for her insult. She will ask Geetha for a plan.

Geetha will mention about Sarswathi not giving any good news even after six months of married life. Chandrakala will ask Geetha to visit Kodhai and raise this topic. She will ask Geetha to make it a big issue so that Saraswathi alone or with Tamish will leave the house. Other hand Natesan will request Kodhai to allow Tamizh and Saraswathi to have food with them sitting on the table.

Kodhai will ask to call Tamizh and Karthi home for lunch.

Will Kodahi accept Saraswathi and Tamizh wholeheartedly? Will Chandrakala get succeed in her evil intention?