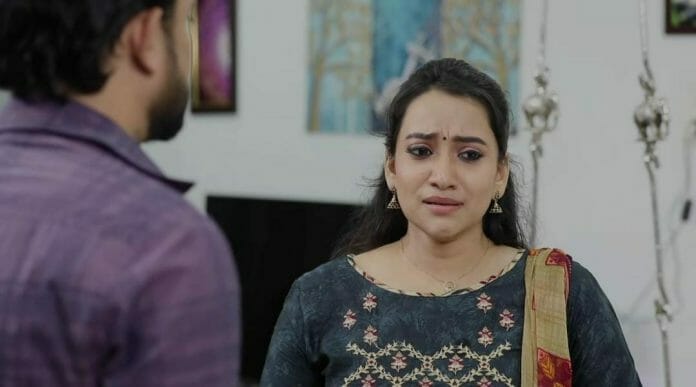 Vijay Television’s popular daily soap, Tamizhum Saraswathiyum, is gearing up for more drama with Tamizh disclosing to the family about Ragini and Arjun’s love affair, but Ragini denied loving Arjun when the family confronted her.

Previously, it was seen that  Tamizh heard Ragini’s love confession to Arjun. He refused to let Ragini to spoil her and Arjun’s life by marrying Adhi for the family’s reputation’s sake. Tamizh promised to get them married. But he wanted to stop the engagement between Adhi and Ragini first.

Ragini thanked Tamizh and hugged him. Tamizh visited Chandrakala and Adhi. Tamizh told them about Arjun and Ragini’s relationship and tried to convince them to cancel Adhi and Ragini’s engagement.

Chandrakala revealed that they already knew this, which shocked Tamizh. She said that Ragini was only having a crush on Arjun and she would soon forget him. Thus, she refused to call off the engagement. Adhi also agreed with Chandrakala.

Tamizh understood that Chandrakala’s real intention was to control Kodhai and her family by making Ragini her in-laws. He said that he would not let this happen. Tamizh and Saraswathi told the family that Ragini didn’t want to marry Adhi as Ragini and Arjun love each other, which shocked the family.

Chandrakala phoned Kodhai and instigated her against Tamizh by telling bout his visit to her house to stop the Ragini and Adhi’s wedding. The family questioned Ragini about what Tamizh said. Ragini lied that she doesn’t love Arjun. He was just her friend.

How will Tamizh and Saraswathi make believe the family that Ragini loves Arjun and stop Ragini and Adhi’s wedding?