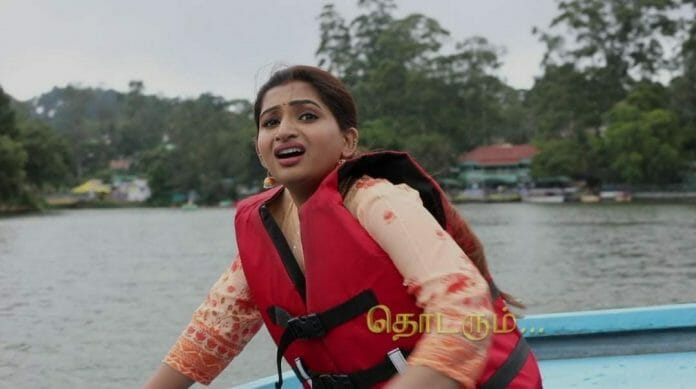 Vijay Television’s popular daily soap Tamizhum Saraswathiyum is all set for some interesting twists and turns in the show with Karthi having a change of heart.

Previously it was seen that Karthi opened up to Vasundhara and told that he really felt good bonding with Tamizh and Saraswathi. He regretted of wasting the first two days in the fight. He admitted that he didn’t see any wrong in Saraswathi and Tamizh act if he saw it from a different perspective.

In today’s episode it will be seen that Karthi will get call from an employee from the factory to ask his guidance. Karthi will get elated when the employee will say that Tamizh asked to follow Karthi’s instructions. The next morning Saraswathi will get angry at Vasundhara for sleeping during the last night.

Saraswathi will apologize realizing her mistake but Vasundhara will say that she’s happy with Saraswathi’s scoldings since they reflect her love and care for her. Tamizh will spill to Vasundhara that he faintes seeing a small snake.

Vasundhara, Saraswathi and Karthi will pull Tamizh leg about this. Later the couple will go for a boad ride. Tamizh and Saraswathi will land in trouble when Tamizh will lose the oar while boating.

What will happen next? How Tamizh and Saraswathi will get out of this danger? Will Karthi help them?