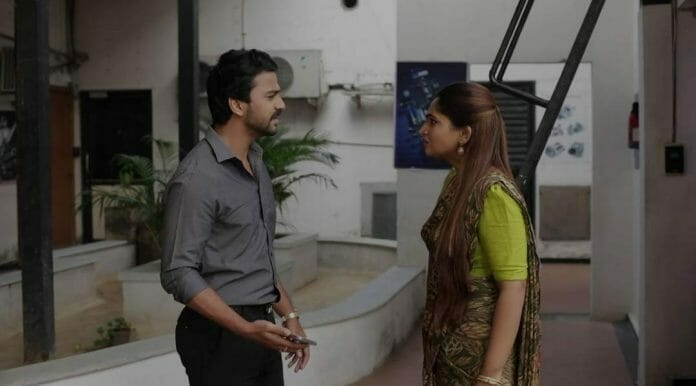 Previously, it was seen that Arjun became Kodhai company’s director despite Saraswathi and Namatchi’s attempt to stop it. Ragini scolded Saraswathi for trying to prevent Arjun from becoming the director of their company. She refused to never forgive Saraswathi for this.

Vasundhara also scolded Saraswathi and asked why she did like that. Saraswathi told about the bad omens she had witnessed after Arjun and his family’s arrival. Vasundhara refused to accept Saraswathi’s reason as there was no logic according to her.

She stated that even if Arjun and his family turned to be really evil, Saraswathi and Tamizh should be blamed as they wanted Arjun to marry Ragini against everyone wish. Saraswathi became sad to hear Vasudhara’s words.

Later, everyone sat as a family and talked about Arjun becoming the director. Arjun’s sister and her husband taunted Saraswathi. Kodhai and everyone started to rebuke Saraswathi. Tamizh defended and support Saraswathi. He admitted that she did wrong, but refused to accept everyone rebuking her like this.

In today’s episode, it will be seen that Tamizh consoles Saraswathi who is sad after being scolded by the family. He promises to be always on her side despite any situation. However he states that Saraswathi committed a mistake.

Saraswathi tries to explain to Tamizh about Arjun and his family’s evil intention, but Tamizh refuses to believe her and says that she has no proof to prove her words. Meanwhile, Arjun and, his family rejoice their victory. They find Saraswathi as an obstacles and decide to trouble her. The next morning, Arjun insults Tamizh in the factory in front of Saraswathi who gets lunch for Tamizh.

Later, Saraswathi confronts Arjun about the same to which Arjun replies her in a mockingly way. Saraswathi confirms that Arjun and his family are really bad and they have soma hidden intentions.

What will happen next? What will be Arjun’s next plan?

Will Saraswathi learn about Arjun and his family seek revenge from Kodhai and Natesanl?