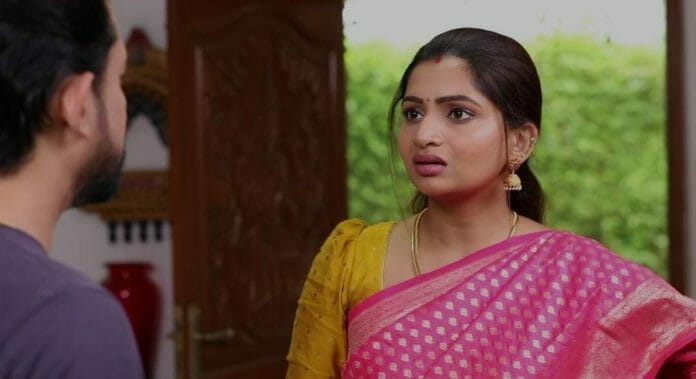 Vijay Television’s popular daily soap Tamizhum Saraswathiyum is gearing up for more drama with Karthi insulting Saraswathi’s parents.
Previously it was seen that Chandrakala learned that Saraswathi’s health got deteriorated the previous day night and was hospitalized. She stayed in the hospital in the whole night.

In today’s episode it will be seen that Saraswathi mother will narrate whatever had happened in Kodhai’s house to the family. They will get shocked. Minnal will call Tamizh and will tell that Saraswathi’s parents visited his house, but Karthi insulted him. A furious Tamizh will question Karthi about insulting Saraswathi’s dad.

Natesan will tell that Saraswathi’s dad spoke bad about Kodhai and cursed her, so Karthi reacted angrily. Tamizh will get angry hearing this and will question Saraswathi’s how her dad could dare to rebuke his mom.

Saraswathi will get disappointed that Tamizh changed by hearing his family’s side story to justify her dad’s insult.

Karthi will tell compare the current scenario to the scenario in which Vasundhara supported her in-lwas against her mother and will say that Saraswathi should have also done the same. He will say that she didn’t as she doesn’t consider their family as hers.

Will this incident create difference between Tamizh and Saraswathi? Will

Tamizh and Saraswathi find out Chandrakala is behind this?