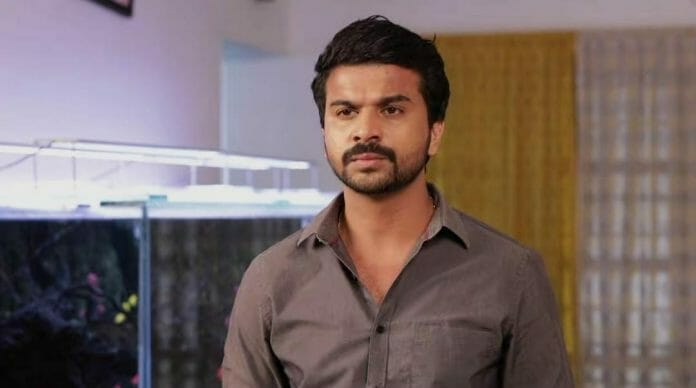 Previously, it was seen that Tamizh consoled Saraswathi who was sad after being scolded by the family. He promised to be always by her side despite any situation. However he stated that Saraswathi had committed a mistake. Saraswathi tried to explain to Tamizh about Arjun and his family’s evil intention, but Tamizh refused to believe her and said that she had no proof to prove her words.

Meanwhile, Arjun and, his family rejoiced their victory. They found Saraswathi as an obstacle to achieve their aim, so they decided to trouble her. The next day, Arjun insulted Tamizh in the factory in front of Saraswathi who got lunch for Tamizh.

Later, Saraswathi confronted Arjun about the same to which Arjun replied her in a mockingly way. Saraswathi confirmed that Arjun and his family are really bad and they have soma hidden intentions. Arjun deliberately urged Tamizh to repair machine without letting him have the lunch.

In today’s episode, it will be seen that Arjun lies to Tamizh that there’s is an important work and make Tamizh work continuously without letting him have lunch and commands Tamizh which angers Saraswathi. The latter asks Tamizh why he wasn’t treated like a director despite being one of the company’s director.

Kodhai and Natesan who have come to the factory hear this. Kodhai decides to give separate cabin for Tamizh in the factory and tells him about the same. She also gets him formal clothes and says that hereafter Tamizh must not work like labor, but like a director. Saraswathi is on cloud nine to hear this while Arjun is shocked.

What will happen next? What will be Arjun’s next plan?

Will Saraswathi learn about Arjun and his family seek revenge from Kodhai and Natesan?