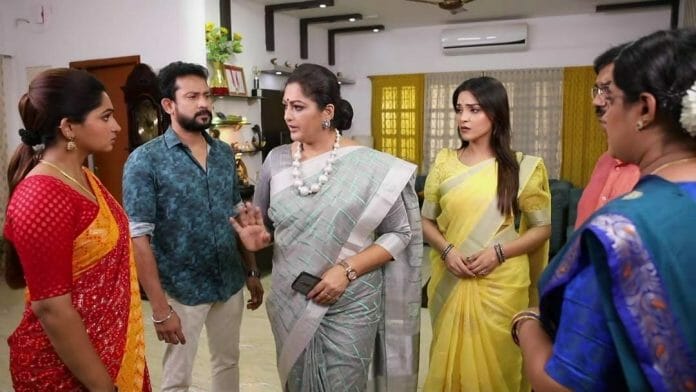 Previously, it was seen that Saraswathi and Vasundhara visited the temple. Saraswathi made Vasundhara sit and completed the rituals. Karthi phoned Vasundhara to know how she’s doing.

Vasundhara lied that she was at home. While speaking to Karthi, Vasundhara slipped and fell. She became unconscious. Saraswathi immediately rushed Vasundhara to the hospital. Hearing Vasundhara’s scream, Karthi panicked. He told it to Tamizh.

The latter phoned Saraswathi and learns about what happened. They rushed to the hospital. Saraswathi was blamed for Vasundhara’s conditions and has to bear Karthi, Kodhai’s scolding.

In today’s episode, it will be seen that Vasundhara feels bad after learning about everyone lashing out at Saraswathi, accusing her of intentionally pushing her down. Vasundhara wants to tell everyone that she urged Saraswathi to take her to the temple.

But Saraswathi forbids Vasundhara from telling the truth to anyone as Karthi could get angry at Vasundhara for disobeying him. After Vasundhara retunrs home, Chandrakala urges Kodhai to send Vasundhara to her house as Vasundhara isn’t safe there with Saraswathi around her.

Will Kodhai forgive Saraswathi? Will Vasundhara tell the truth to the family?