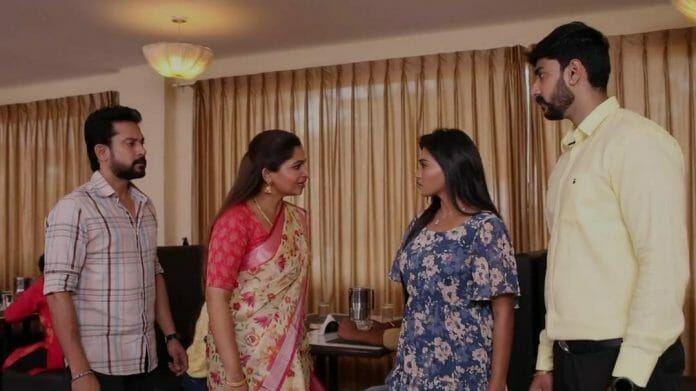 Vijay Television’s popular daily soap Tamizhum Saraswathiyum is all set for some interesting twists and turns in the story with Chandrakala faling to harm Tamizh.

Previously it was seen that Natesen thanked Kodhai to accept Tamizh and Saraswathi upon his request and expressed his joy over the same. But Kodhai shocked him revealing that she didn’t completely accept them. She told that she had to permit them to eat lunch with them when Geetha insulted them.

Kodhai said that she couldn’t forgive them easily to deceive her, but at the same time she couldn’t let any outsider to know about their family problem and take advantage of it. Unaware of this Saraswathi and Tamizh were elated that Kodhai finally accepted them and were excited to start their married life.

Later Chandrakala and Geetha follow Tamizh in a car on his way to the office to hit his bike. But their plan failed and their car hit the platform. Tamizh noticed them and helped them.
In today’s episode it will be seen that Abhi will find Saraswathi overjoyed and will tease her. Tamizh and Saraswathi will plan to have lunch outside.

Madhu will introduce her boyfriend to her parents. Geetha will appreciate him while her husband will not like him. Madhu and his boyfriend will come across Tamizh in the restaurant.