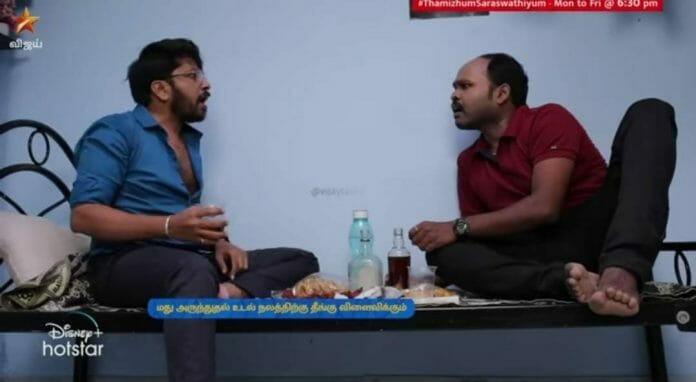 Vijay Television’s popular daily soap, Tamizhum Saraswathiyum, is gearing up for more drama with Namatchi intoxicating Paraman to extract truth from him.

Previously, it was seen that while Natesan and Namatchi secrety met in a road side snacks stall and ate fried food like they always do without Kodhai’s knowledge. Paraman arrived there. On seeing Paraman, they hid.

However Paraman spotted them. He took them to another stall and eat chicken dishes along with Natesan and Namatchi. While eating Natesan dropped the food on his shirt. After returning home, the stain on Natesan’s shirt got noticed by the ladies of the family. They questioned him.

Paraman spilled the truth. Kodhai, Saraswathi and Vasundhara scolded him. Kodhai asked him to get out of the house if he can’t follow the house’s rules. In order to calm down the matter, Arjun rebuked Paraman and insulted him. On knowing this, Namatchi took Paraman to to drink alcohol.

He got him intoxicated and questioned about Arjun. Paraman said that Arjun was a complete fraud. Tamizh heard this standing at the door step.

In today’s episode, it’s seen that Paraman spilled that Arjun brought the proposal to buy the company to provoke Karthi and create a rift between Karthi and Tamizh. Tamizh was shocked to hear this.

Namatchi asked Paraman to confess the same thing again so that Tamizh record it in a video, but Paraman got unconscious before that. Tamizh phoned Saraswathi and told him about the same. He wanted to tell this to Kodhai and Natesan despite Saraswathi asking him not to do without any proof.

What will happen next? Will Tamizh tell Kodhai about Arjun’s truth? Will she believe him?