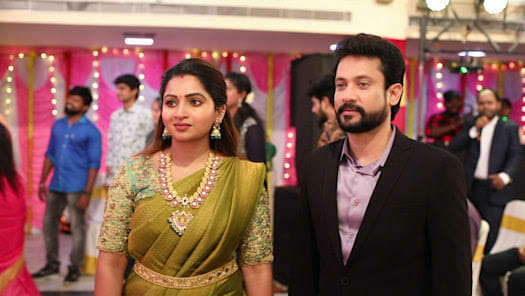 Previously, it was seen that Adhi refuses to attend the Ragini and Arjun’s pre wedding reception as he won’t be able to bear his defeat to Arjun. Chandrakala assures Adhi that he will marry Ragini and she has a plan for that and arranged everything.

She convinces Adhi to get ready. In the wedding mandap, Saraswathi tries to talk to Vasundhara, but the latter speaks to her harshly. Kodhai and Natesan see this and adivise them. Later, Adhi is shocked when his ex-girl friend arrive at the pre wedding reception.

In today’s episode, it will be seen that the girl claims that Arjun ditched her for Ragini who is from a wealthy family. Arjun admits knowing the girl, but denies her accusations. The girl shows her and Arjun’s photos on her phone. Kodhai and everyone are shocked to see this. Chandrakala instigates Kodhai and Natesan against Arjun.

However Tamizh foils Chandrakala’s plan by bringing the manager of the company where Arjun worked previously and proves Arjun’s innocence. Adhi gets vexed and decides to leave the wedding venue. But Chandrakala stops him.

Chandrakala says that she underestimated Tamizh who is uneducated. She says that she has a plan B and she will executed using Ram who is one of the worker of Kodhai industry, but works for Chandrakala. The latter phones Ram and tells her plan.

What’s Chandrakala’s new plan? Will she get successful in her plan this time?