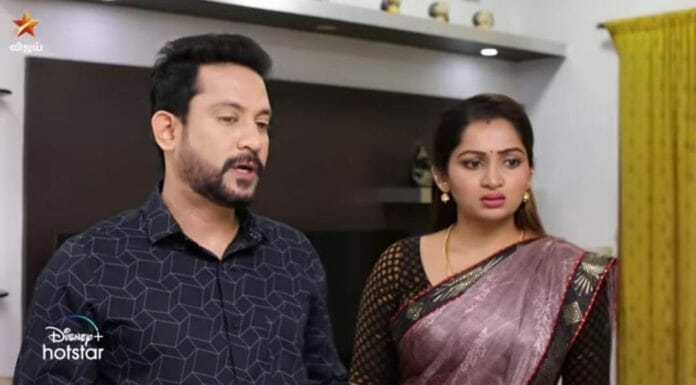 Previously, it was seen that  Vasundhara rebukes Saraswathi and Tamizh for humiliating Chandrakala. She accuses Saraswathi of provoking Tamizh against her mom. She continues to lashes out at Saraswathi despite family members trying to stop her.

Arjun and his family are happy to see this. Vasundhara refuses to talk to Saraswathi and eat any food made by her hereafter.

In today’s episode, it’s seen that Namatchi is shocked after noticing a notification that sixty lakh credited on his account. He informs Tamizh about the same. Tamizh is shocked to hear this and his suspicion on Arjun grow stronger. In the house, Arjun’s mom and sister try to instigate Saraswathi against Vasundhara, but Saraswathi gives them an apt answer.

Tamizh returns home and tells to Kodhai and Natesan about sixty lakh has been transferred to Arjun’s account from the person whom they bought company. Saraswathi asks Tamizh why he would pay Arjun such a big amount.

Tamizh says that Arjun got commission for the company deal, shocking Kodhai and Natesan. Tamizh also says that Arjun tried to create a rift between him and Karthi through this deal. Kodyand Natesan are taken aback to learn this.

What will happen next? Will Arjun get successful in his intention?

Will Saraswathi be able to reconcile with Vasundhara?