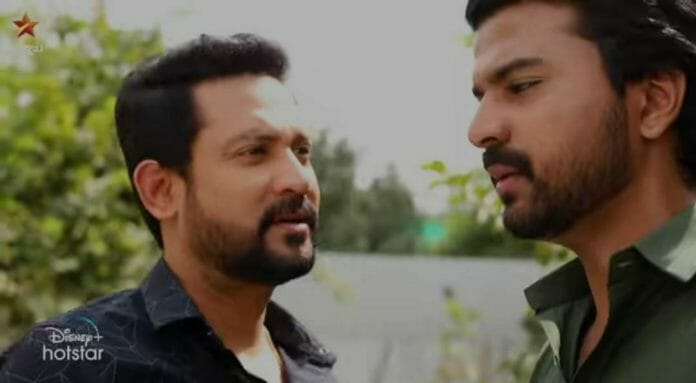 Previously, it was seen that Paraman spilled that Arjun brought the proposal to buy the company to provoke Karthi and create a rift between Karthi and Tamizh. Tamizh was shocked to hear this. Namatchi asked Paraman to confess the same thing again so that Tamizh record it in a video, but Paraman got unconscious before that.

Tamizh phoned Saraswathi and told him about the same. He wanted to tell this to Kodhai and Natesan despite Saraswathi asking him not to do without any proof.

In today’s episode, it’s seen that Tamizh confronts Arjun about trying to separate him and Karthi. Arjun acts innocent and blames Saraswathi for brainwashing him. Tamizh warns him not speak a word against Saraswathi.

Tamizh warns Arjun to stop his plotting. He says that he didn’t beat him yet die to his brotherly love for Ragini and threatens not to spare him the next time. Arjun is shocked to hear Tamizh.

Later, he tells this to his family who are shocked too. They wonder how Tamizh learned this and they are scared if he also knows their real intention to marry Ragini.

Arjun assures them that he didn’t know the whole truth yet. Just then, Paraman returns home fully druken. Arjun is shocked to learn that Namatchi gave him alcohol and doubts that he could have spilled the truth. He gets furious on Paraman. Arjun plans to use Paraman to tackle this.

Will Tamizh tell Kodhai about Arjun’s truth? Will she believe him?