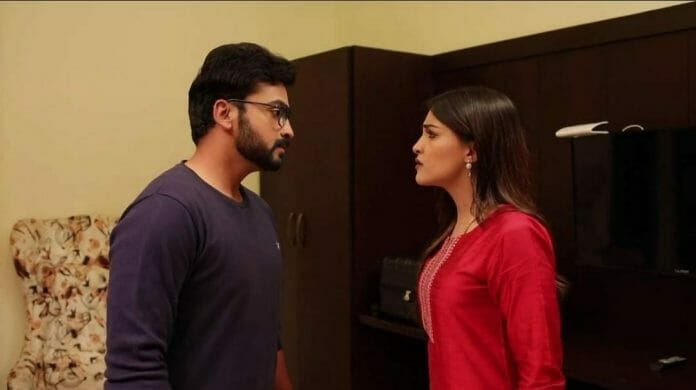 Previously it was seen that Tamizh tried to get romantic with Saraswthi. The latter strictly said that they shouldn’t start their married life until Kodhai accepts them completely. Other hand Vasundhara asked Karthi to get ready to visit the places.

Karthi refused as he didn’t want to go along with Saraswthi and Tamizh. Vasundhara said that she would tell Tamizh and Saraswthi that thru weren’t coming.

Karthi agreed to come stating he doesn’t want to hear their lecture. During the visit Karthi got annoyed seeing Saraswthi, Tamizh and Vasundhara were having fun. He clicked Vasundhara’s photo and flirted with her. He asked Vasundhara to click his photo. Just then Tamizh called them to see the sunset.

Vasundhara happily got ready to leave. Karthi got irked and returned to the hotel. Later Vasundhara and Karthi got into a heated argument. Karthi said that he regretted loving and marrying Vasundhara. The latter got hurt with Karthi’s hateful words. Vasundhara tried to calm him down to have a discussion, but in vain.

Karthi said that he doesn’t like to see her face. He said that he hates her and wished that she didn’t exist in his life. Karthi angrily drove off ignoring Tamizh. Later Tamizh informed Karthi that Vasundhara cut her wrist nerves and they rushed her to the hospital shocking Karthi.

In today’s episode it will be seen that Karthi will rush to the hospital. He will apologize to an unconscious Vasundhara and will express his love for her. Later Tamizh and Saraswthi will reveal that it’s all a drama shocking Karthi.

Karthi and Tamizh will have a joyful moment, but Karthi will get angry when Vasundhara will say that they should thank Tamizh and Saraswthi for their efforts. Karthi will again fight with Vasundhara and will leave the room shocking Vasundhara.

How Tamizh and Saraswthi will react learning about Karthi fighting again with Vasundhara because of them? How they will fix it?