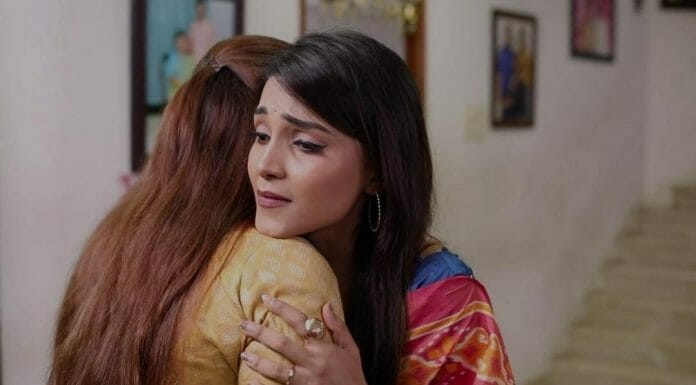 Vijay Television’s popular daily soap Tamizhum Saraswathiyum is gearing up for more drama with Chandrakala vowing to throw Saraswathi out of the house.

Previously, it was seen that Chandrakala instigated Madhu against Saraswathi by saying that she was responsible for her break up with her boyfriend and manipulates Madhu to take revenge on Saraswathi. Meanwhile Saraswathi confronted Tamizh about avoiding her. She said that she knew that he was pretending to sleep the last night.

Tamizh was unable to to tell her the truth. Later Chandrakala visited Kodhai and requested her to take Vasundhara to her house till her delivery. Kodhai and Saraswathi rejected Chandrakala’s request which angered Chandrakala and the latter vowed to throw Saraswathi out of the house very soon.

In today’s episode, it will be seen that Kodhai will care for Vasundhara and will prohibit her from doing any household works. Saraswathi will want to take Vasundhara to the temple to fulfill the prayers. But Karthik will forbid Vasundhara from going out and will react angrily at Saraswathi.

Vasundhara apologizes to Saraswathi for Karthi’s behavior. Chandrakala and Geeta will notice Adhi talking to Ragini over the phone and will disconnect the call seeing Chandrakala. Geeta will urge Chandrakala to talk Adhi about Ragini.

Tamizh will feel guilty for ignoring Saraswathi and will express it to Namatchi. Saraswathi will decide to fast for Vasundhara every week. She will phone Namatchi and will tell about the same. She will also say that Abhi will bring lunch for Tamizh as she won’t.

Later Vasundhara will get touched to learn that Saraswathi is fasting for her. She will decide to go to the temple with Saraswathi against Kodhai and Karthi’s decision.

What will happen next? How Kodhai and Kartik react it?