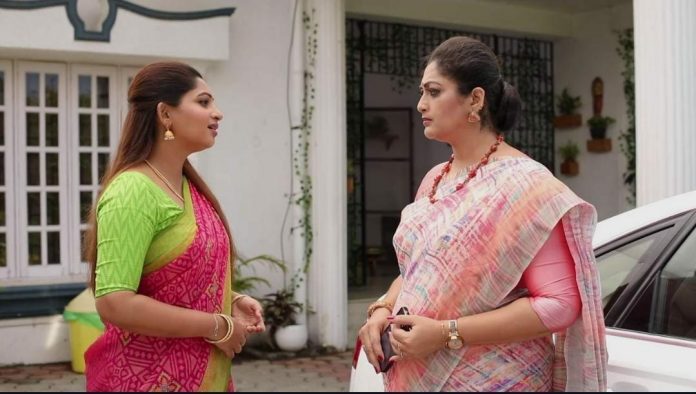 Vijay Television’s popular daily soap Tamizhum Saraswathiyum is all set for some interesting twists and turns in the story with Karthi rebuking Chandrakala for tricking Saraswathi to prevent her from writing exam.

Previously it was seen that Saraswathi told Kodhai to call Chandrakala home and inform her that Karthi and Vasundhara started their married life since Vasundhara spoke harsly to Chandrakala and asked her to get out.

Saraswathi said to not speak with own parents could be a big punishment and Vasundhara shouldn’t go through this. She advised Vasundhara to reconcile with Chandrakala. Gothai agreed with Saraswathi’s view. She called Chandrakala and requested her to come home.

Chandrakala came to meet Vasundhara. The latter reconciled with her mother. Kodhai told that everything was sorted out between Vasundhara and Karthi during their honeymoon. Chandrakala found that karthi’s behavior was changed and he was acting cold with her. Later Chandrakala questioned Karthi about the same.

Karthi confronted Chandrakala about giving sleeping tablet to Saraswathi through his aunt to stop her from writing exam which shocked Chandrakala.

In today’s episode it will be seen that Saraswathi will confront Chandrekala. She will tell that Karthi reconciled with Tamizh and her, so she won’t be able to use karthi against them hereafter. She will warn Chandrakala for not trying to separate their family.

Chandrakala will fume in anger. Later Kodhai and Natesan will get happy to see Saraswathi and Karthi having a normal conversation.

Vasundhara will reveal the brave act of Saraswathi to save Karthi which changed Karthi’s heart. Family will admire Saraswathi’s bravery. In the office Karthi will punish a senior staff when he made a mistake.

What will happen next? What will be Chandrakala’s next move?