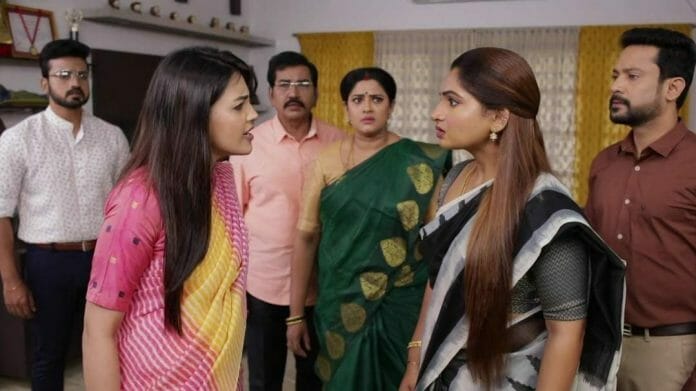 Vijay Television’s popular daily soap, Tamizhum Saraswathiyum, is gearing up for more drama with Vasundhara bursting out in rage.

Previously, it was seen that  Tamizh shared with Namatchi his conversation with Saraswathi. Namatchi agreed with Saraswathi and said that he had also suspicion on Arjun. Tamizh enquired Karthi and learned that He didn’t ask help from Chandrakala.

He wonders how Chandrakala knew about Karthi selling the factory. He wondered whether Saraswathi was right about Arjun. He questiions Arjun about it. Arjun got nervous, but managed to lie. However, Tamizh’s doubt wasn’t cleared, but at the same time he coudn’t be sure that Arjun had informed Chandrakala.

Arjun understood that Tamizh had started to doubt him. So he alerted his family. His family phoned Chandrakala and asked her to come home and handle things. Chandrakala arrived at Kodhai’s house.

Saraswathi asked Tamizh to question Chandrakala about who had told her regarding Karthi buying the factory. Tamizh also did the same. Vasundhara who overheard Tamizh and Saraswathi burst out in rage and shouted at Tamizh and blamed Saraswathi shocking the family.

In today’s episode, it’s seen that Vasundhara rebukes Saraswathi and Tamizh for humiliating Chandrakala. She accuses Saraswathi of provoking Tamizh against her mom. She continues to lashes out at Saraswathi despite family members trying to stop her.

Saraswathi is hurt with Vasundhara’s words and shares her sorrow with Tamizh. Kodhai grows worries about the rift between Vasundhara and Saraswathi.

What will happen next? Will Arjun get successful in his intention?

Will Saraswathi be able to reconcile with Vasundhara?