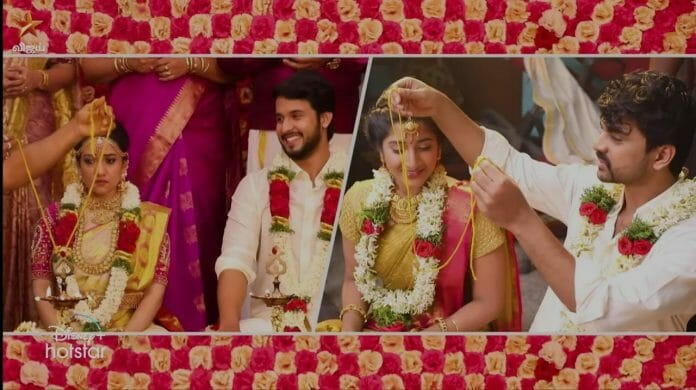 Previously, it was seen that Chandrakala’s men caught Arjun’s friend. They forced him to phone Arjun and asked him to come outside of the mandap. Arjun obliged. They kidnapped Arjun as soon he had come out. The next morning, everyone was busy in wedding preparation. The priest asked to bring the groom. Everyone was shocked not to find Arjun in his room.

They searched for Arjun in the whole mandap and didn’t find him. Kodhai and the family were worried about where Arjun has gone. Meanwhile Chandrakala’s men threatened Arjun to kill his friend and recorded a video.

Ragini received a shocking video of Arjun in which Arjun said that he lovedthe girl who accused him of ditching her as he realized her love for him.

In today’s episode, it will be seen that Kodhai and Ragini are shattered after seeing Arjun’s video. Kodhai and Adhi try to instigate Kodhai against Arjun. Tamizh and Saraswathi tell that it’s someone’s plan to stop Ragini and Arjun’s wedding.

They blame Chandrakala which angers Vasundhara. The latter defends her mother and argues with Tamizh. Tamizh and Saraswathi opposes when Natesan requests Chandrakala to agree to ask Adhi to marry Ragini to save her life.

Vasundhara accuses Saraswathi of having insecurity feeling so she doesn’t not want Ragini to Mary Adhi who is also rich. She adds that she heard Saraswathi telling the same to her mom which shocks Kodhai. Kodhai decides to get Ragini married to Adhi.

Chandrakala also agrees. Adhi and Ragini sit on the wedding mandap. They perform the puja rituals before marriage while Tamizh tries to locate Arjun’s whereabouts with police’s help.

Will Chandrakala’s plan work? Will Adhi and Ragini get married?