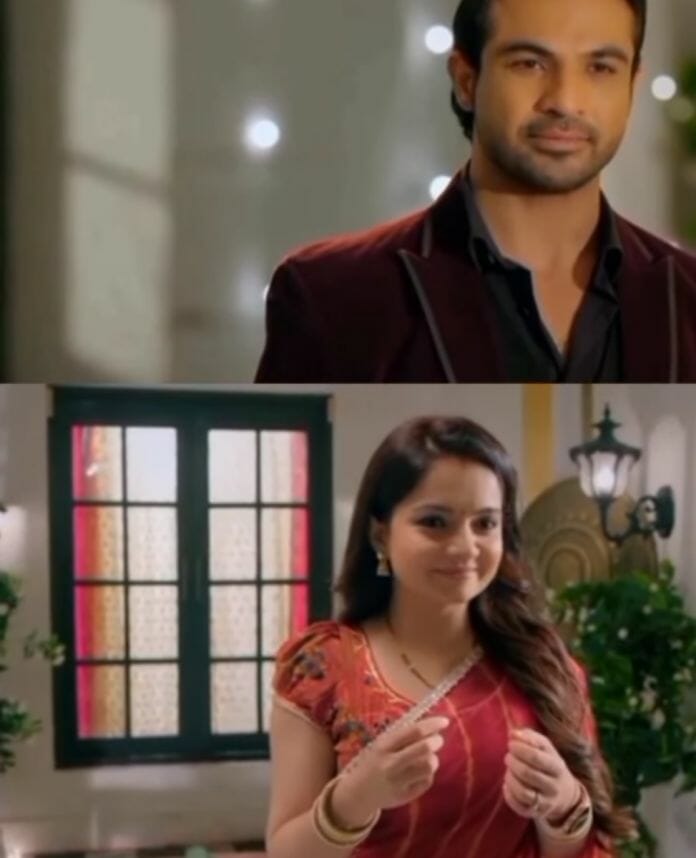 Gopika sees the interaction between her and the joker. She says something to Saksham and the latter goes and tells Munna and Chirag. They all goes and takes the guests masks from their face and brings them to the stage. They all sees whether any one of the women interacting with Kesari or not. They all looks for Kesari’s mother. Kesari’s mother thinks to herself that the Modi’s are searching for her everywhere but they will never get to know where she is and smirks.

The Modi’s and the guests dances on the stage. Munna Saksham Chirag and Gopika goes aside and tells that they failed to find Kesari’s mother. Gopika gives something to Munna and asks him to dispose it. He agrees and leaves the place with Saksham and Chirag.

Kesari’s mother comes to Gopika. The latter gets scared seeing the joker infront of her all of sudden. Kesari’s mother as a joker demands money from Gopika for her performance. Gopika agrees and asks her payment amount.

She then tells she want two thousand rupees as a salary. Gopika agrees to pay the amount and goes inside. Meanwhile Mithila tells the family members that they saw everyone’s face and all those people are well known people which means Kesari’s mother lied to them to attend this party. Saksham agrees with Mithila. Gopika gives the money to Kesari’s mother and asks her to stay for a while but the latter refuses.

Gopika goes inside. Kesari’s mother goes to Kesari and Jigar who is playing with one another and informs them about her leaving. Kesari pleads her to stay with them for a while. Kesari’s mother agrees. She then says she is thirty and need water. Jigar tells he will bring her juice for her and leaves the place.

Gopika goes to the family members and tells them something and says that they have to be around Kesari and they all comes out and sees Jigar is there with a juice glass in his hand. He tells everyone he went to bring juice that time Kesari was there only. They all gets worried so goes to search for Kesari. Kesari’s mother as a joker tells Saksham and Gopika that she saw a masked woman taking Kesaari outside with her. Gopika refuses to believe her words but Saksham takes her out. Kesari’s mother smirks and brings Kesari out of the box.

Kesari asks whether they get caught to which Kesari’s mother says they will never especially when the joker is her mother. Kesari gets happy. She then pleads her mother to let her introduce her to the Modi’s also the promise she made to Gopika but Kesari’s mother refuses saying she will meet them some other day. She then rushes towards the door but gets trapped in a met. The Modi’s comes there. They all says how they made her fool by making her believe they didnt suspect her.

Kesari comes there and pleads Gopika to remove the net from her mother. Gopika tells they are playing a game and asks Jigar to take Kesari with her. Mithila demands Kesari’s mother to reveal her identity. Kesari’s mother laughs and calls them fool saying if she wipes off the make up then one of them between Saksham and Chirag’s truth will come out. She then reveals her identity. Saksham asks what is she doing here shocking the family members.

Gopika asks whether he knows her. Saksham says they used to be a friend during their college time and her name is Sharda. Sharda says they are not only friends and tells Saksham that they spent a night together during their college farewell like a husband and wife and Kesari’s surname is Modi. Gopika and the family members looks shocked.

Precap: Saksham goes to wear the Mangalsutra on Gopika but the latter refuses and asks him to make her wear it when he gets the clarity.