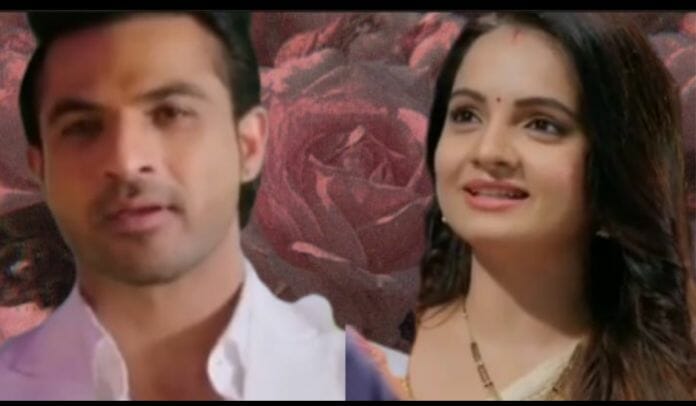 The episode starts with Gopika calls Mithila Aunty Ji and tries to ask her something but Mithila gives her the money and asks her to leave the place saying her work is done. Gopika takes the money and asks Mithila is she know the women is she is special but Mithila refuses to tell Gopika. Gopika looks at the sketch and thinks why she feels that she has some connection with this women and leave the room. Mithila takes photo of the sketch and sends it to someone and calls that person and tells him to give whatever the details he gets about the women she wants that also asks not to tell this to anyone.

Outside Priya gets upset because she is suffering like this believing the priests words and tells that she can’t able to tolerate all this so decides to go inside and have a good sleep instead of suffering like this. Gopika wonders why Mithila looks stressed about the women who she sketched and thinks that she has to find out the truth at any cost. Ashi watches Gopika from upstairs and leaves to her room. Gopika hears someone is opening the window so she takes the nearby lamp. Priya enters the house through window by covering herself in a blanket. Gopika decides to hit Priya thinking she is a thief but Priya reveals it’s her. They both gets into an argument.

Gopika asks Priya what is she doing here to which Priya tells that she is here to use the washroom and leaves the place. Gopika smirks and tells that she knows well why she is here but she wont let her do this and goes to Saksham’s room and tries to wake him up but Saksham pulls her towards him. He then wakes up. Gopika asks him what made him sleep like this who he is dreaming about. Saksham tells that she is all he thinks about. Gopika smiles and tells Saksham that she wants to show him something so asks her to come with her. Saksham refuses and tells that they can spend sometime but Gopika takes him with her.

Priya on the other side takes the place on the couch and tells before Saksham wakes up she will go outside and lies on it. Saksham goes to Priya and makes her feel guilty saying she dont want both of them to get together that’s why she is not doing what the priest asked her to. Priya apologises to him and leaves the place saying she will follow the instructions. Saksham and Gopika hifi each other after Priya leaves.

Ashi in her room thinks that Gopika asked seventy crores right but now she knows her truth she needs to blackmail her using the video which she captured in her mobile to get some money. She writes what she has to tell Gopika and decides to ask five crore first. Chirag comes there and asks Ashi what is she writing. Ashi tears the paper and eats it. Chirag asks her what happened why she is behaving like this.

Ashi makes an excuse that she is the one who has to make what are the grocery items they need in the house. She leaves the room saying she will take Mithila’s help to make the Grocery list. Chirag tells himself no matter what no one will eat a paper even if they are hungry and decides to leave but stops himself seeing the notepad which has imprint in it of what Ashi wrote so he looks at it. Gopika mocks at Priya. Priya gets angry and tells Gopika that she knows she is the one who behind all this.

Gopika tells that she told someone on the call about what she is doing while she is standing near by Saksham’s room. Priya tells Gopika no matter what she will remain outside only. Gopika tells that no one expect the Modi’s knows about her marriage with Saksham. If all three of them goes outside it will be her who will recognised as Saksham’s wife. She also tells that Muh Dikhayi ritual also not held for her. Priya gets angry and tells Gopika that her Muh Dikhayi will happen she will make sure of it and leaves the place.

Gopika tells that she is the one who is going to win this challenge too. Mithila worries that Jignesh not yet given her any information about the mysterious lady also prays for the women safety to God. The mysterious women go and hide herself nearby a shop.

Minal gets worried thinking whether Keshav able to find the mysterious woman or not. She also wonders what will happen if he fails and also worries thinking she don’t want anyone to know about their secret. Chirag in his room use pencil and shades the imprint and gets shocked reading that Ashi is planning to blackmail someone and wonders who it is.

Minal decides to have tablet but gets upset seeing there is no water so she decides to bring it on her own but Priya comes there and gives her water also asks her why she looks worried. Minal lies she is not and blames her headache. Priya offers to give her a head massage. Minal enjoys it and thinks Priya is good for Saksham.

Priya asks Minal what kind of daughter in law she wanted for her Saksham before Mithila chose Gopika to which Minal tells that she always wanted someone Saksham can take along with him to meet his friends and colleagues someone who is educated also understands him well just like her.. and stops midsentence. Priya acts and says that though she truly thinks she is suitable for Saksham but not accepting this infront of everyone. She also tells how her Muh Dikhayi also not happened yet.

Minal tells Priya that she will talk about this to everyone and make arrangements for this ritual. Priya gets happy. The next day Hiten calls Tejal thinking it’s someone who is from call center. Tejal’s colleague praises her for getting someone in this short period to call her this frequent. Tejal talks to Hiten thinking it’s someone else. She then gets annoyed when Hiten tells he has nothing to talk. Tejal’s colleague tells her the more she talks the more she can earn so Tejal asks Hiten about his likes and dislikes. Hiten shares what are the food she likes and takes Tejal’s name but stops midsentence and questions Tejal what she likes.

Tejal also shares what kind of food she likes but tells that she can’t able to eat because of her then realises that she is going to reveal him she is married which will not give her anything good so she changes the topic. Hiten then cuts the call saying that his mother has arrived. Chirag asks Ashi who she is planning to blackmail. Ashi gets worried. The family members comes there. Chirag gives Mithila the paper. Mithila reads it aloud and asks Ashi to tell whose secret she knows. Saksham looks at Gopika but the latter signs that she doesn’t know. Minal worries that Ashi may be know her secret. Saksham worries that Ashi may know about his secret and looks at Ashi.