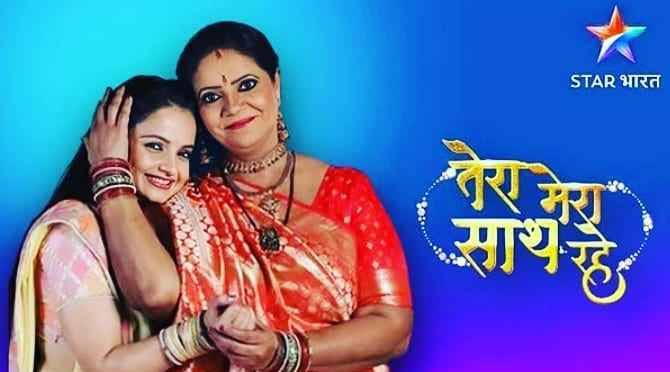 This week Tera Mera Saath Rahe episode starts with Mithila questions Saksham about his lie that Kesari is mute. Saksham gets worried but both Chirag and Munna handle the situation by saying its God’s miracle also about the selective mutism. Gopika and Mithila grows suspicious so they decides to find the truth at any cost. Saksham and his gang questions Kesari about her parent’s name and realises that Kesari will not tell them the truth so Saksham and gang decides to talk to their exes once again. Munna and Chirag gets relived when their exes tells them that they never get intimated. Gopika figures that Rakesh is not Kesari’s father so she decides to find the letter at any cost. Saksham thinks that his gang replaced the latter’s place and when they says they didn’t done anything such lead all four of them to worry.

Mithila enquires Kesari about both her father and mother. Kesari tells each qualities of Modi’s men as her father’s quality. Later Mithila gets the letter and they all gets shocked when they learns Kesari is one of their husband’s daughter but Modi’s men refuses at the same time they refuses to swear on their wives. Gopika decides to not to share a room with Saksham and tells him that she cant believe Saksham is not sure whether Kesari is his or not but he always told that he dont want a kid. Saksham looks on helplessly. Mithila feels that she can’t get upset with Kesari for some one else mistake so enquires her about her mother. Kesari tells that her mother can able to hear them and see them also how her mother comes to see her in this house for two times shocking Mithila.

Cops arrives at the Modi house and tells them they received a tip about them using children for their household works. They all denies it but Kesari comes there wearing servant clothes with a bucket full of water and starts cleaning the floor which shocks the Modi’s. Kesari follows her mother’s instructions and starts cleaning the floor infront of the cops which shocks the Modi’s. Inspector enquires the Modi’s and Kesari. Kesari tells him Saksham is her father and she is doing this work on her own. Saksham refuses first but Gopika signs at so he also lies to the inspector that Kesari is his daughter. Later Gopika and Saksham gets into an argument over Kesari’s lie. Kesari pleads Saksham to play with her and expresses her joy of having a father.

Saksham scolds Kesari when his suit gets ruined while playing with her. Later he raises her hand on Kesari after she draws a mustache on Saksham’s face and his employees laughed at him. Gopika gets upset with him for his behavior. Saksham realises his mistake so goes to convince Kesari to forgive him and dances funnily for her. Gopika gets surprised seeing Saksham’s behavior towards her. She refuses to dance with Saksham saying she is upset with him when Kesari insists. Kesari says that Saksham will get forgiveness from Gopika for sure. They both looks at each other.

Kesari makes Saksham and Gopika dance together and enjoys their dance. Gopika tells Saksham that they are getting closer to each other because of Kesari only. Saksham apologises to Gopika for his behavior. Jalebi comes to the Modi’s house and tells everyone Kesari is her daughter which leads Rajjo try to commit suicide so the family members goes after her to stop her from doing it meanwhile Kesari’s mother instructs Kesari to run away from Jalebi after hears Jalebi’s plan to kidnap Kesari. Kesari tries but fails. Kesari’s mother informs the Modi’s that Jalebi kidnapped Kesari so the Modi’s determines to save Kesari. Saksham and Gopika gets a clue from Kesari’s mother that Kesari is help capitive near by a temple. Saksham and Gopika finds Kesari’s location. Saksham puts up an act with Jalebi’s goon and brings Kesari out of the place. Jalebi comes and gets shocked. She tries to alert her men but Gopika stops her by covering her mouth with her hand. Saksham and Gopika looks worried.

In the next week viewers will get to see that Jalebi’s men will put a knife under Kesari’s throat and threaten Saksham and Gopika. Saksham will fight with the goons and save Kesari. Later at night Saksham will share his fear of losing Kesari to Gopika. They both will wonder how Kesari’s mother get to know about Kesari’s location. They both will notice the earphone on Kesari’s ear. Gopika will say hello through the ear phone. From the other side the women will say she is Kesari’s mother. Gopika will look on shocked.