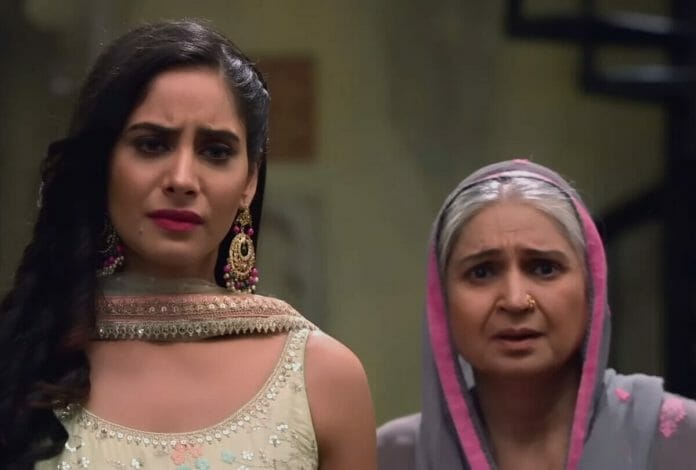 As reported earlier Sahiba sees that a burnt log is about to fall on Angad. Sahiba pushes Angad away and saves him. Angad falls on a woman who is holding Sindhur on a plate. Sahiba catches Angad from falling down. Sindhur goes into the air and falls on Sahiba’s Maang and Sahiba’s forehead.

Everyone gets surprised and praises their Jodi. Angad gets furious seeing Sahiba. Santosh sees Colony Lohri celebrations from the window. Kul and Nimmi decide to meet Santosh to know how is she and to mock her. Santosh thinks she will ruin their plan.

Santosh says she can sense the burning smell from them. They say Seerat can’t get married in Brar’s house even though she wins the competition and reminds Santosh that their house is running because of Sahiba. Santosh says Angad Brar is after her Seerat and shows a photo of them together.

Her friends seeing this misunderstand and comment on them. Angad misunderstands Sahiba and argues with her. The host of the party apologises to Angad and defends Sahiba. Sahiba asks the host not to defend her and comments on Angad. Angad humiliates Sahiba.

In the upcoming episode, viewers are going to witness Seerat thanks Garry for dropping her. Seerat thinks Garry is more handsome and successful than Angad. Later Seerat returns home.

Santosh asks Seerat what happened at Brar’s house. Seerat says a miracle happened and they invited dad and you for a meeting and it’s about to talk about my alliance. Santosh feels happy.

Sahiba returns home with Kirat. Santosh sees Sahiba and asks what happened and what is on her forehead? Kirat says it is Sindhur. Sahiba says when she saved someone Sindhur fell on her. Seerat says it is a coincidence as they are talking about my marriage but Sahiba came home with Sindhur on her.

Will Sahiba and Angad feel their connection? Will Garry be able to snatch Seerat?
All these questions will be answered in the upcoming episodes.