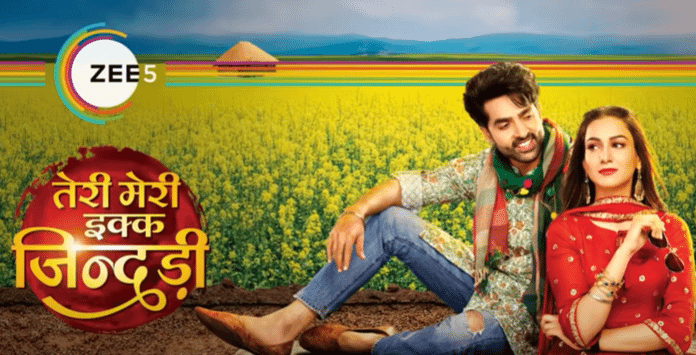 The episode starts with Arjun telling Jogi to seek apology. He tells Jogi to admit his fault in return Jogi will sign contract to get a big chance in the industry. Arjun says such scopes come very rarely. Jogi should not refuse. Jogi signs in the middle of the paper and shows it to Arjun saying its his autograph on Arjun’s nasty thoughts. Arjun tears the papers angrily. Jogi questions Arjun’s upbringing saying Rupa and Biji never told him to support the wrong thing. So he will never apologise to Arjun. Jogi says he is happy with his simple lifestyle, he doesn’t want anything more. Jogi says someone taught him to believe in hard work. So he will never lose. Jogi looks at Mahi and says she taught me this. Jogi says Arjun’s intentions are wrong as he doesn’t want to sort things but his conditions are worse. Jogi challenges Arjun saying he will become superstar and will meet him one day. Arjun tells him to stop dreaming. Arjun says he runs the music industry and he will make sure Jogi doesn’t get any chance. Chanda tells Jogi that Mahi is trying to contact producers but they are rejecting Jogi. Jogi gets surprised.

Mahi tries to convince Jogi’s family that she will find a solution. Biji breaks down saying their dreams will never get fulfilled if Jogi fails to become star. Mahi tries to console Biji but Rupa tells Mahi not to give unnecessary hopes to them. Mahi gets upset.

Mahi sees Jogi is sitting alone. She tells him not to give up. Jogi says he didn’t lose hope as Guruji told him to stay strong always. Jogi says he is not afraid of struggle. He will achieve his goal for sure. Mahi gets happy and Jogi gives autograph on Mahi’s hand saying he likes the feeling of giving autograph. Mahi hugs Jogi and says she wants to see the courage in his eyes always. Jogi says her support means everything to him.

Jogi and Mahi find it difficult to sleep at night. They recall Arjun’s threat. Mahi falls asleep and Jogi decides to do something to solve the problem. He tries to find a way to stop Arjun from troubling him.

Jogi gets drunk and goes near Pappu’s bungalow. He vents out his frustration saying every bad thing is happening because of Pappu. People questioned Mahi’s character, Arjun troubled Mahi, his family got insulted and even fought with goons all because of Pappu. Mahi doesn’t find Jogi next to her and goes out to check. Jogi pours alcohol infront of Pappu’s house in toxicated state and sets the ground on fire. He says in this way he will purify Pappu’s house. Mahi comes and sees that. She gets shocked.