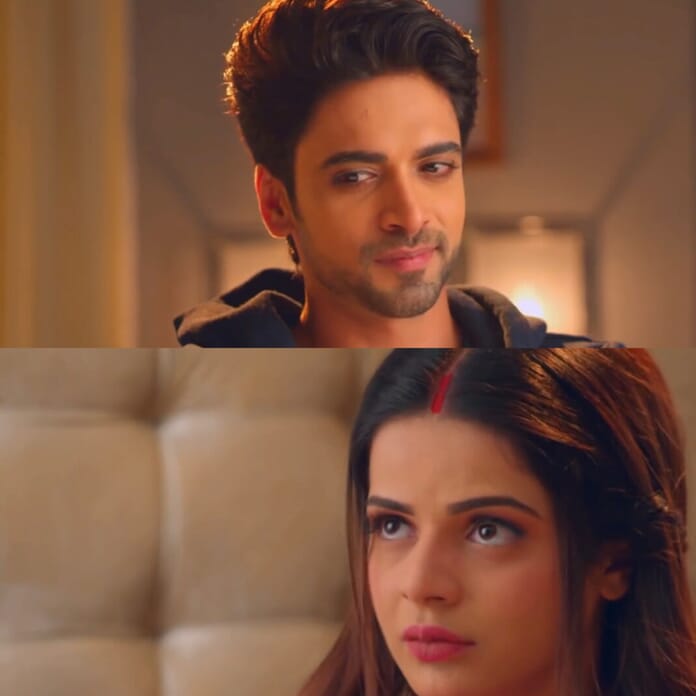 The episode starts with Thapki saying you are sure about promise and acting to be unaware and I am happy that you have fulfilled the promise made to my mother, good job. Purab says I can’t believe that youre worried about this matter. Thapki says it broke her from inside. Purab asks why she didn’t clear it with him. Thapki says let’s clear it now and just answer me with yes or no, did you want to leave me forever at my mother’s place during paghphera but you brought me here for your promise to my Mom. Purab says yes. Thapki says you want me to stand on my feet to make me leave forever. Purab says what nonsense? I just want you to be independent. Thapki says she knows everything. Purab shouts at her to listen to his words but Thapki says what to listen? I’m just a responsibility and burden to you. Purab says it’s not the truth. Thapki asks him to tell the truth and what he feels for her. Purab says I promised to your Mom but I’m not doing everything for the promise. Thapki asks him to tell what he will name the relationship between them. Purab gets message then he leaves to office saying they can discuss in the evening and asks her to set the mood. Thapki cries and thinks she understand.

Sagar chats with Preeti. Priyanka comes to him with icecream. Sagar keeps his mobile aside seeing her. Priyanka says let’s share icecream and she suspects why he kept his mobile aside seeing her then she sees emoji of a hug in the message and leaves from there. Sudha notices Preethi is chatting with bubbly and she gets shocked. Priyanka thinks Parithosh means boy then why did he send hug emoji to Sagar. Sudha thinks if Preeti is having affair with some girl? Then she prays god to save her daughter. Priyanka to thinks if Sagar is having affair with some guy.

Thapki serves food to everyone and she recalls her moments with Vinod and Dad. She thinks she got an amazing family. Thapki tries to serve Veena but she denies it. Thapki thinks I didn’t lose anything by becoming your Bahu and I learned a lot. Sudha confronts Preethi about Bubbly. Preethi says she is my sister. Sudha says I asked you to search rich guy but you’re wasting time so come to my line otherwise I won’t leave you. Preethi signs ok and she thinks glad I saved Sagar’s name as Bubly.

Dadi asks Thapki if everything is fine. Thapki says everything is fine. Dadi asks her to join them for lunch. Thapki says she will join after serving them. Veena asks where is Purab. Priyanka says he is nowhere at home, is everything fine between you guys Thapki. Dadi says he went to the office for an important meeting. Sapna and Priyanka discuss it’s like an issue happened between them. Hansika asks them to enjoy the tamasha. Thapki thinks I considered this house as mine but how can I relate to them when my husband considers me as responsibility.

At cafe Preethi thinks why Priyanka asked me to meet here, did she find about my affair with Sagar? Priyanka comes there in a burqua and says some Paritosh sent hug wala emoji to my husband. Preethi says it’s common in friends too. Priyanka says good but keeps an eye on my husband. Preethi agrees and asks her to not take any stress. Thapki writes a letter to Purab saying she is freeing him from their relationship and thanks to him for whatever he did to her and her Mother and she asks him to consider the letter as her resignation to the job and their marriage and she cries recalling her moments with Purab, she takes the Durga idol with her.

Precap: Thapki leaves the house without telling anyone. Purab searches her and finds her dupatta piece on the bench.