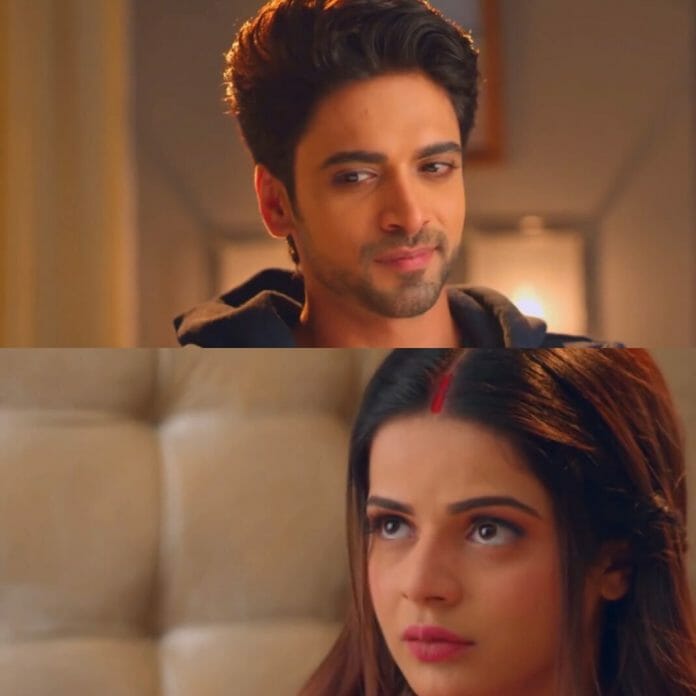 The episode starts with Thapki trying to feed Prasad to the cow but Cow denies and gets hyper. Dadi asks why cow is getting angry suddenly. Thapki says it was fine before aarti. Vinod says it’s increasing. Cow behaves wildly then everyone runs in different ways to escape. Thapki falls. Purab comes in front of her then he asks Thapki to leave and manages cow with a kerchief. Everyone feels worried.

Veena prays for Purab’s safety. Purab struck in edge and The cow is about to hit him but Thapki plays the flute which calms down the anger of the cow. Pandit praises Thapki’s heart and he asks her to stay the same then he asks them to feed Prasad to Cow. Priyanka tells them they will feed first but cow doest eat from them. Sapna asks why cow is not eating. Pandit ji says there is a problem between a couple otherwise gau maa doesn’t reject it. Dadi asks Purab and Thapki to feed.

Purab tries to feed but it doesn’t eat then Priyanka asks what’s the problem with Purab as he is becoming Dad too. Thapki tries to feed but cow doesn’t eat then Dadi says maybe gau maata wants them to feed as a couple. Purab and Thapki offers Prasad and cow eats it. Thapki says their union is always good. Everyone feels good. Thapki thinks to set Hansika. Urvashi thinks she got an easy target and she opens the cupboard of Preethi and notices expensive jewellery in it then she thinks this family is perfect target for her. Anshul comes there and asks what’s she doing here. Urvashi manages him with a lie.

Sargam vomits continuously. Thapki supports her. Dadi and Veena call Sargam. Thapki closes the bathroom door. Veena and Dadi ask Sargam if she is fine. Thapki tells she is in the bathroom because of her morning sickness. Dadi says it’s common. Purab asks who’s having morning sickness. Veena tells your wife and she asks him to take care of Thapki first. Purab agrees and he knocks the bathroom door and asks her to allow him inside saying he wants to help her. Dadi asks her to open it. Thapki opens the door asking Sargam to hide. Purab tells them he will manage and asks them to leave. Veena tells him evening guests are coming to give aashirvaad.

Sapna plays games with her friends in the hotel. Where she sees Sagar who comes with Preethi but she assumes it’s Priyanka and thinks they came to make her happy. Purab tells Thapki to vomit saying he will help her. Thapki says Purab then he says you’re suffocating me and do you know how our family reacts when they find the truth. Sargam tries to control her vomiting. Purab tells he will never talk with her if she doesn’t reveal the truth to him and he breaks glass in anger and warns her to reveal the truth otherwise I will inform both families that you’re lier.

Sapna searches for Sagar and Preeti to give her blessings. Preeti asks Sagar if hotel is fine. Sagar tells it’s fine. Sapna comes near room and realizes it’s not Priyanka’s voice then she peeks into the keyhole and notices Sagar is romancing Preeti and gets shocked.

Sargam tells Thapki that she doesn’t want her to spoil her relationship with Purab and she tells Thapki that she will face everyone and she takes back her promise. Thapki asks what she meant then Sargam asks her to tell truth to Purab. Hansika overhears their conversations and thinks she won’t let Thapki become mahaan in Purab’s eyes.