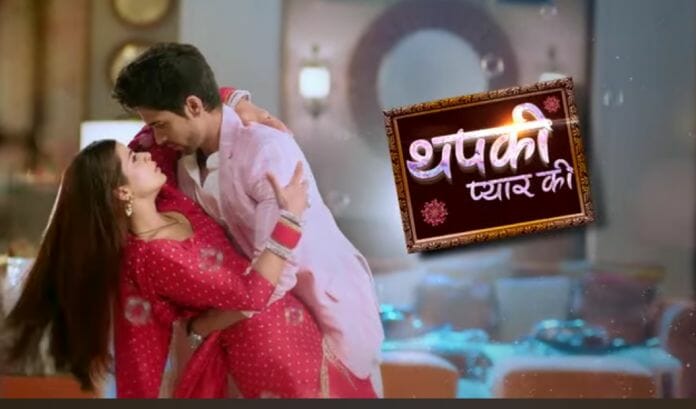 The episode starts with Hansika keeping the basket on Thapki’s head and the mangalsutra beads break and fall on the ground. Thapki gets shocked. Veena Devi scolds Thapki and says she can’t sit in the pooja without mangalsutra and you can’t save your mangalsutra then how can you protect my son and heir.

Thapki says she will tie the beads before the pooja. Veena says 2hours left for pooja then when you make Prasad if you stay in beading the chain. Dadi tells Hansika will help Thapki. Hansika agrees to help. Veena says mangalsutra must be complete with all beads otherwise you can’t sit in the pooja. Hansika smiles and thinks Thapki can’t perform pooja and she goes with Cow dung.

Hansika and Priyanka thinks to trap each other. Priyanka asks Hansika to prepare the stove with cow dung. Hansika asks Priyanka to make and both fight with each other. Dadi comes there and asks them to finish the work as Pandit ji will arrive soon. Hansika and Priyanka takes cowdung making faces. Thapki collects the beads. Purab helps her saying he doesn’t want his Mom and Dadi to feel sad. Anshul prepares food for Urvashi. Ashok asks why he is preparing food, is there anyone special coming. Anshul tells yes and he praises Urvashi. The calling bell rings then Anshul removes his apron. Ashok asks him to stay calm and opens the door. Urvashi comes there. They welcome her.

Veena thinks Pandit ji arrived and doesn’t know where is this Thapki. Pandit ji tells them pooja will start in 5 minutes and one who performs pooja must have tika to participate in pooja. Hansika says what’s the use of this pooja if Thapki can’t participate in it. Sapna says it’s for my son and daughter in law too. Hansika says Thapki is becoming a mom so she needs blessings but doesn’t know where she lost. Thapki comes there. Dadi says she came. Hansika asks why she didn’t wear a mangalsutra. Veena asks if she ties the mangalsutra or not. Thapki tells 2 beads are missing. Veena tells she won’t let her sit without them.

Thapki sees Hansika smile and she recalls Hansika took something while taking cow dung then she hugs Hansika for helping her and in that time she takes beads from Hansika which she hid in her Dupatta. Hansika tells it’s fine. Thapki tells them she got beads and asks pandit to apply muhurat ka tika. Purab asks where she gets them. Thapki tells them they are in hell and she ties the beads and she asks Purab to make her wear it. Purab makes her wear the mangalsutra. Pandit ji applies muhurat tika to them. Hansika gets angry.

Couples sit in the pooja. Pandit makes them perform the pooja and he sends Thapki and Priyanka to get Prasad. Hansika thinks she won’t let pooja happen. Ashok asks Urvashi about her Ngo. Urvashi tells she likes it and asks him about his other family. Anshul tells her they went out and Thapki is married to Purab Singhania. Urvashi thinks to be careful and she goes to use the washroom. Pandit ji tells pooja gets completed when they keep chandan tika to cow and offers bhog. Thapki tries to feed Prasad to cow but the cow gets angry. Hansika thinks cow must be angry as I mixed something in cow grass which is affecting it and this pooja won’t get finished.