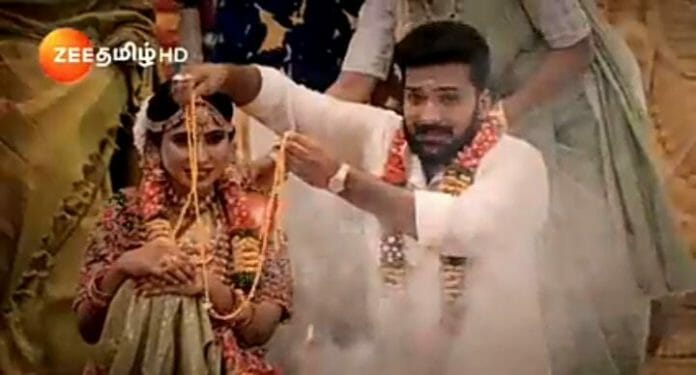 Previously we have seen that Thanichalam kept the bangle in Malar’s bag. Sathiya started the investigation. To save Malar, Sita handed over her bangle to Sathiya. Sita spoiled Thanichalam’s plan. A girl approached Pandi. Pandi suspected Arjun.
Thanichalam hid the girl in the room after learning the truth. Thanichalam refused to accept the truth in front of Markandeyn’s family.

In today’s episode, Malar learns the truth. She takes the girl to the wedding venue to stop the marriage. They fail to believe Malar’s truth. Thanichalam asks Malar to send you the wedding venue. They fail to listen to Malar. Thara asks for the evidence from Malar. Megha is going to beat Arjun when he lies in front of the crowd. Malar introduces Mega to Thara. And she says that Mega is Arjun’s wife.

Thanichalam refuses to accept Malar’s words. Ravi and Raja ask Malar to go out of the wedding venue. Pandi asks the crowd to watch the screen. Thara slaps Arjun. Malar requests Thara’s mother to do a wedding for Arjun and Mega.

Will Thanichalam take revenge?
Keep checking this space for the latest update on your Zee Tamizh shows.