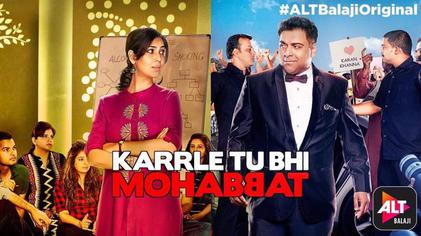 Ekta Kapoor can be thrashed for his repetitive cycle of marriages and patch up break up googlie in
her daily soap but one can’t deny the quality of the content she displayed on the digital platform
named ALT Balaji. Her web series are a hit in the genre and least is to mention that the concepts
are so refreshing and delightful. “Karle Tu Bhi Mohabbat” is one such web series by Ekta Kapoor
which gathered numerous applause from not only critics but also fans and neutral viewers.

The latest promo of the web series “Karle Tu Bhi Mohabbat” season – 3 aired its trailer for the
upcoming story and the level of perfection is so easily visible in it. Ram Kapoor and Sakshi Tanwar
are one of the most beautiful onscreen couple from the days of Bade Ache Lagte Hain and the
previous two seasons of the series also sealed the excellence of the actors chemistry with each other.
As we have seen the last episode of the series showcased that the lovebirds are already at loggerheads
and parting ways. Alongside the entry of the third wheel (Hiten Tejwani) also occurred in the life
of Tipsy as a lawyer. In the trailer we have seen Karan is being accused molestation and his wife
Tipsy is already away from him with their daughter.

Alongside we had Karishma Tanna also who will play a very important role in this series. All in all the changed dynamics of Tipsy and Karan’s relationship and why this so in love couple ended up making it bitter will be unfold on 2nd April.

In short the web series will be a sure shot watch for the viewers and ardent fans of Tipsy-Karan
shippers. Also this season will put some more light on the shades of Hiten Tejwani character and
what is his actual motive behind entering Tipsy’s life. The web series will stream exclusively on
ALT Balaji application. Tell us in comments how much you are excited for the 3rd season of the
series?