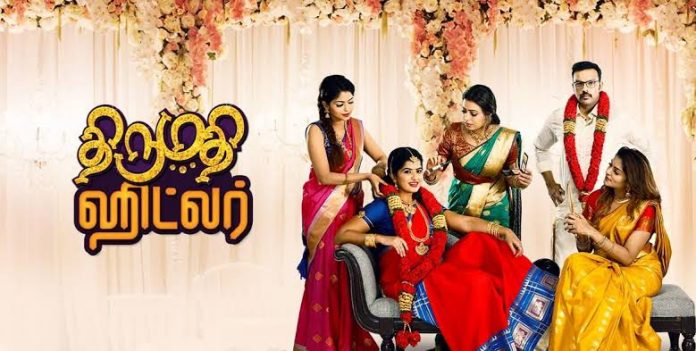 The episode starts with Hasini gets tears in her eyes after watching the video evidence. She places the phone in her handbag and keeps thinking about that Video. Jaya searches for Hasini and finds her sitting alone in terrace. She questions her why is she looking dull? She questions her Is she had a nightmare too? Hasini is blabbering to her in fear. Jaya calls her take food but she refuses to take food. Jaya questions her Is she angry on her for forcing her to do nuptial chain function. She deny it and leaves from there. Jaya thinks what happened to her?

Archana, Maya and Chithra are noticing Hasini looking dull and questions her what’s bothering her? Maya teases her may she is worrying about that dream. She is fearing that she would have leave from this house. They are keep teasing her and says that AJ may kill her but never tie Prevalika’s nuptial chain to her. Hasini gets shock to hear it and leaves. Chithra questions Archana what happened to her now? Why is she looking dull? Maya says that she may worries about that dream. Archana deny it reasoning she used to eat in all situation but she refuses to take food today. Something big happened. She decided to find it out.

Hasini is sitting in her room silent. AJ comes there and notices her sitting silent. He doubts what happened to her monkey is silent today. If she sit like this then it mean she is not normal. He calls her but she is not minding him. He touches her but she gets scared. She starts blabbering in fear. He questions her why is she staring him in this way? She asked him to don’t push her down? He questions her Is she standing in hill to push her down? She questions him will he push her down if she stand on hill? He nods to her by saying he is waiting for that moment. She hits on wall and never allows him to touch her. She lied to him that she wanna sleep. He asks her to sleep here Hasini runs from there in fear. She feels sleepy and hungry too. AJ thinks that she is behaving strange.

Hasini enters into her room after confirming Hitler went. She glares at AJ picture and thinks because of him she is suffering. She thinks that she is confused whether to reveal his truth to Vickram or not? She reminds the kidnapping moment. She thinks that she was locked in this house because of him. She typed the message to Vickram but AJ calls her on correct time. He asks her to bring his Wallet to Hospital he forget to take it. She teases him to change his brain.

Hasini reaches to hospital and notices manager is waiting there. One staff rushes near him to enquire about AJ. He is not giving heed to him. Staff shares to him about his wife’s state and asks him to help him but Manager lashes out at him.AJ comes there and scolds the manager for behaving like this to him. He tells him that he is trying his best to save his wife. He can’t able to understand the pain but he knew it. He is still can’t believe his wife left him. He is feeling the pain in his heart daily. He shares his grief to him. Hasini listens to this all and delete the message from her mobile.