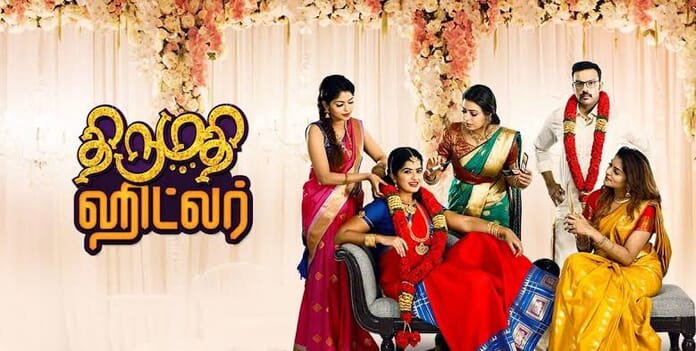 The episode starts with Hasini hears the staff thanking AJ emotionally for helping him to save his wife. He blesses him to live 100 years with his wife. Hasini hears it and deletes the message she typed to Vickram. Hasini keeps staring AJ without blinking. He asks her to go with him he will drop her in home. She shakes her head and sits beside him. Romantic songs plays in her heart. She is keep staring him. He questions her why is she staring him in this way! Is he play the song? She thinks already song playing in her heart. He drops her infringe of house and leaves from there. Jaya is not eating the food thinking about the dream. Hasini enters inside her home to witness Jaya refuses to take food.

Jaya too notices her and says no one cares about her feelings here. All are behaving in their own wish. Her own son is not listening to her words then how will she expect Hasini to listen her. She has no love on her but pretending like she cares for her it’s all acting. Hasini questions her Is she scolding her? Jaya nods to her. Jaya complaints that she don’t know the value of nuptial chain. So go and remove it. Hasini says to her she will definitely remove it. Jaya glared her. Hasini tells her that soon she gonna arrange nuptial changing function so she will do it on that day. Jaya happiness having no bounds. She hugs Hasini and praises her as the best one. She feeds food to her. Hasini praises it taste. Chithra complaints that she take her appalam. Hasini sits with them and takes the food.

Jaya rushes to the store room to thank god. She thank Ganesh idol for fulfilling her half of the wish. She shares her happiness with him. She says that only Hasini agreed to do this function so she won’t shift his place. She will do it after AJ accept it. Jaya rushes from there to talk with Hasini. AJ returns to home both Hasini and Jaya notices this. Jaya tells her its her duty to make AJ accept this. Hasini says to her she can’t able to convince that Hitler. It’s her duty to make him accept it. Jaya says to her may sometimes they will listen to their wife words then mom. Hasini deny it reasoning Hitler is very eager to kick her out of this house then how will he do it. Jaya intentionally looking down on her to provoke her. Hasini agrees to take that challenge. Jaya appreciate her. Hasini asks her to come when he go extreme in anger. Jaya assures to her. Hasini prays to god and enters into her room. She is staring AJ. He questions her why is she staring him in this way? Hasini asks him to agree to do this nuptial changing function. AJ says that he won’t do it already he can’t able to send her out after he tied the knot with her one time. Is she trying to become his wife through this function officially? Hasini complaints that he was the one married to her after cheating her.

Hasini asks him to agree with it for Jaya at least. AJ stands adamant in his decision. She says to her he will never give Prevalika’s nuptial chain to her. Hasini asks him to consider his mom and agree to this. AJ pushes her out but Jaya holds her. She confronts him and questions him why is he behaving like this? She is asking to him her rights. AJ asks her to stop supporting her she don’t know about her. Jaya questions him what didn’t she know about her? Jaya complaints that this function will definitely take place and he will give Prevalika’s nuptial chain too. He nods in no. Jaya says that he has no rights to hold that nuptial chain after she died. AJ stands adamant in his decision.

Jaya and Hasini takes it as challenge and wishes makes him agree to this. AJ is taking bath In bathroom Hasini and Jaya turns off the pipe connection. AJ asks Hasini to turns on the pipe. Both demands him to agree to this function. He gets angry and comes out of the house. He takes water from hand pump and fresh up. Hasini and Jaya thinks their first plan flopped.