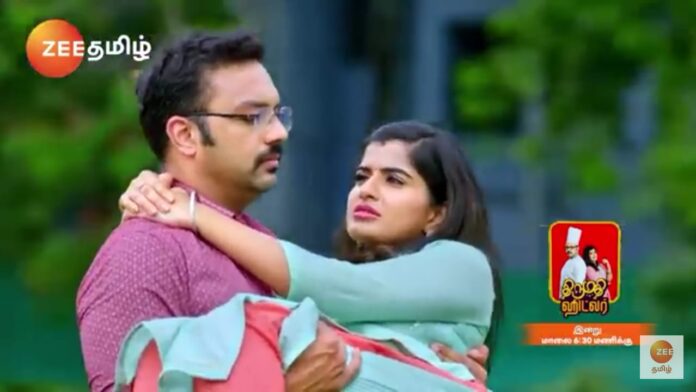 Zee Tamil popular hit comedy show ‘Thirumathi Hitler’s is all set to engage audience with its unique story line. This story is about youngest trending mother in law. Earlier we saw that Hasini was threatened by Vickram Viewers will see AJ to save Hasini

In Today’s episode we see; Hasini hears the audio evidence and gets shock of her life. Hasini thinks why did AJ shouted to Prevalika like this? She hears knocking sound she opens the door and finds her conscience there she closes the door on her face. Hasini’s conscience plays on TV and asks her to take the correct decision reasoning its the last chance of her. Hasini doubts whether AJ is good person or not? She wishes to visit golden resort. Hasini travelling on Auto and get stucked in traffic. Driver asks her to cross the railway line she can reach to golden resort. Hasini notices one lady tries to commit suicide she saves her but her leg stacked on it. She runs from there and bring AJ there to help her. AJ saves her. Driver questions Hasini Is she went to golden resort? She nods.

In the upcoming episode viewers will see; Hasini will pretend like her leg paining to avoid AJ’s questions?
AJ will take Hasini to home. Jaya will shock to see her in that state. She will enquire to Hasini how come she got injured? Chithra will question her doesn’t she said to them she is going to temple then how come she went to golden resort? Hasini will lie to them that she heard one temple is near by golden resort that’s why she went there. She will add that she saved one lady from committing suicide but hey leg got stucked in it then AJ saved her. Jaya will feel happy to hear it. Hasini will questions AJ why did he saved her? AJ will tell her he failed to save Prevalika but he won’t allow her to face same situation too.

What will happen next? Will Hasini find out the truth behind Prevalika’s death? Will AJ find out Hasini’s intention?