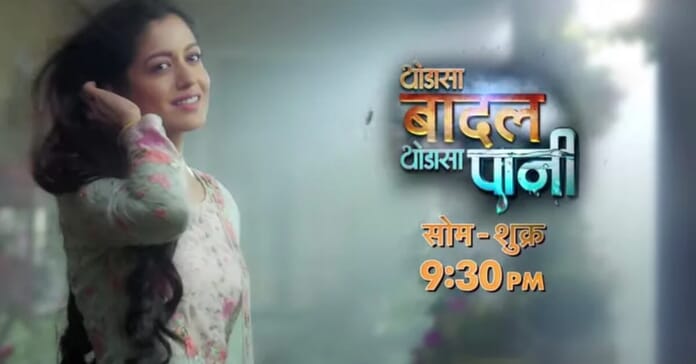 Colors TV show Thoda Sa Badal is now moving towards an interesting phase raising the interest of audience. Anurag has finally dared to speak out his emotions to Kajol but Kajol is under misunderstanding due to Priyanka’s lie. Kajol mistakes Anurag’s love as pity. Priyanka continues her dirty game further to keep Kajol misinformed. Will Kajol realize about Anurag’s true feelings for her? Will Anurag be able to express his heart out to Kajol? Will Kajol find out about Priyanka’s lies?

Kajol told she knows Anurag is good and the girl he marries would be really lucky but she cannot accept his proposal because there is someone else in his life. Thakur Maa told Kajol to calm down first and then ask her heart about Doctor Anurag and you will find your answer. Anurag asked his mother where did he wrong? Anurag told he fell in love and expressed his feelings to a girl for the first time and she said no. Kajol kep thinking about her moments with Anurag. Priyanka told Kajol her engagement with Anurag got fixed.

Anurag realized maybe he made Kajol uncomfortable by aksing her in front of everyone and not even giving her time to answer. Kajol thought what she doesn’t want is someone having pity and feeling sorry for her. Anurag decided to send a sorry card to Kajol.

Chandana scolds Kajol and told her what is she thinking to do why did she reject Anurag’s marriage proposal ? Kajol thought how to make her mother understand there is someone else in Anurag’s life. Chandana told people are insulting Kajol by attaching her name with Anurag and now when Anurag wants to give the relationship a name she should accept it. Anurag’s aunt told Anurag she knows he is not good at expressing his emotions so she will talk with Kajol and sort everything out. Anurag told her he made a mistake and he will correct it.

Anurag wrote a apology letter to Kajol but it got misplaced. Anurag thinks Kajol doesn’t have any feelings for him and decides to leave to US. Anurag told to get his US Visa processed quickly. Priyanka overheard Anurag and comes to his chamber to ask where is he going. Anurag told he has an important case and calls the ACP regarding Bishu’s robbery case. Anurag tells Priyanka he got an offer from a hospital in New York so he is going to work there. Priyanka thought Anurag is leaving because of Kajol and she has to do something about it. Anurag thought one he can get Kajol rid of her money problems he can leave peacefully.

Sharmila falls unconscious at the temple. Kajol heard a lady falling unconscious and came to help her. Sharmila got glad finding Kajol in temple. Kajol told Sharmila to drink some water and is about to call Anurag. Sharmila stopped Kajol from calling Anurag and told her about Anurag going to US. Sharmila made Kajol promise her that she will stop Anurag. Kajol thinks she promised to stop Anurag hut how will she do so. Grandmother met Priyanka and told her only she can stop Anurag. Priyanka told Grandmother that Anurag is leaving because Kajol broke his heart and if he stays away from her he will forget her. Priyanka told Dida Maa not to stop Anurag because once he forgets Kajol even she can go to US.

Kajol thought she rejected Anurag’s propasal very rudely and she should apologise and tell him the reason for her rejection. Priyanka watched Kajol at the reception and thinks she cannot let Kajol meet Anurag till he leaves for US. Priyanka told the nurse not to let Kajol meet Anurag. The episode ended with Priyanka finding Kajol standing behind her.

Kajol told Priyanka she came to meet Anurag because Sharmila is in so much stress about him leaving. Priyanka told aunty is of old thinking but me and Anurag came to this decision after thinking a lot. Kajol thought Priyanka is right and who is she to stop Anurag and left. Thakur Maa told everyone that Kajol is going to get bravery award for saving the little girl on Durga Puja. Rajesh called Kajol and told Uttam’s goon got caught and we should thank Anurag because this happened only because he is friends with the ACP.

Thakur Maa told Kajol she should meet him once at least to say thanks as Anurag has done so much for us. Anurag got a call from the club telling they want him to give the award to Kajol. Chandana recalled Bishu gifting her a necklace on her birthday because of Kajol’s requests. Chandana blesses Kajol and tells her blessings will always be there with her. Naina tells Apu to do her Aashiward ceremony’s decoration properly and asks Chandana to help her get ready as she wants to look the best for Arjun.

In the upcoming episode Kajol waits for Anurag at the award ceremony but Sharmila tells her he might not come today as he is leaving from today’s flight only. While driving Anurag thinks if he went to meet Kajol today he won’t be able to leave her ever. 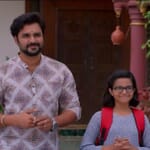