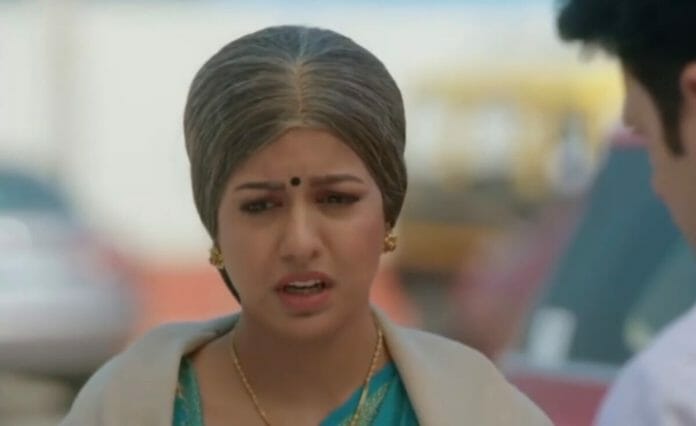 Colors TV show Thoda Sa Badal Thoda Sa Paani is the story about a simple kind hearted girl Kajol who tries to keep everyone happy and in the process doesn’t think about herself. Anurag meets Kajol and falls in love with her nature as she reminds him of his mother. With Kajol’s faith and help Anurag is able to walk again. Anurag decided to propose Kajol and marry her. Arjun keeps pressurising Naina to arrange money for his new business. Will Kajol arrange the money for Naina? Will Anurag and Kajol get married? Will happiness stay in Kajol’s life this time? Will Kajol rescue Bulti?

Kajol asked Naina where is Bulti? Naina told Kaushik is ill so everyone is in farmhouse. Kajol understood Naina is also involved in this plan. Anurag called Kajol and told Bulti is not at the farmhouse and now he is also getting worried about her. Kajol told Naina to call Bulti as she is unable to find something. Naina called Anandita and Kajol took the phone from her and told she wants to talk with Bulti.

Anandita told it won’t be possible to talk with her now and she will text Naina later. Kajol told Anurag she heard noise of train while talking with Bulti. Anurag told Anandita had a house in Burdwan near railway station and they might have taken Bulti there. Kajol told Anurag not to go alone as they can harm you. Anurag told he will inform the police and send the location to Kajol.

Kajol thought Naina is so much blinded by money that she forgot her own family. Kajol disguised as an old lady to go out of the house. Kajol told Anurag even after disguising she got out with great difficulty. Kajol told Anurag she saw someone outside her house while escaping. Anurag told Kaushik might have hired him to keep and eye on your house. Anurag told Kajol not to worry as he has told everything to police.