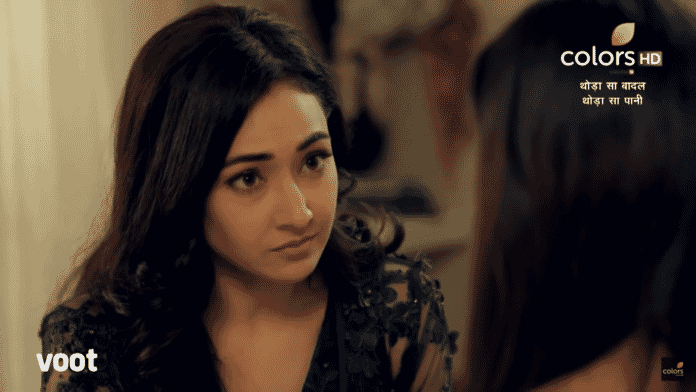 Colors TV show Thoda Sa Badal Thoda Sa Paani is the story of a girl’s struggle in her life. The story is about how Kajol,who tries to keep everyone happy finds her happiness. Anurag came into Kajol’s life and wished to give her everything she deserved but Priyanka blackmails Anurag to marry her if he wants to keep Kajol safe. Will Kajol find out Anurag’s sacrifice? Will Priyanka be successful in her plan? Will Anurag find a way out of this blackmail? Will Naina make a position for herself in her in-law’s house?

Anurag told Priyanka to stop her drama and stop worrying his family. Priyanka told Anurag she will show him her madness. Kaushik told Bolti to be ready as the groom’s family is going to see her next day. Apu told Kajol they are snatching Bolti from him and he will cannot live without her. Anurag told Priyanka till when will she keep threatening him and tells her let the truth finally come out today. Priyanka faked calling the inspector and says she wanted to record her confession and she knows who attacked her.

Anurag snatched the phone from her and Priyanka told him he is so worried about Kajol and this is just a trailer of what she can do. Kajol told Chandana to talk with Bolti’s family once and find out if she felt the same way for Apu. Kajol thought if Bolti also loved Apu she won’t let their love story remain unfinished. Kaushik told he has planted his guy outside Apu’s house and on his instruction Apu will be sent to prison forever under any fake case. Bolti begged Kaushik and Anandita not to do so as she loves Apu a lot and won’t be happy without him.

Naina sent a picture of Bolti with Arindam to Kajol. Apu got heartbroken on watching the picture and told he forgot that Bolti is Arjun’s sister. Kajol thought Bolti is a nice a girl and she won’t cheat like this. Arindam’s family told they want the marriage to happen soon as they have to return to London. Kajol told Apu to have faith in his love.

In the next episode Bolti escapes her house. Kajol is surprised to find Anurag at her house. Shreya’s finds Naina’s earrings in Bolti’s room and accuses her.