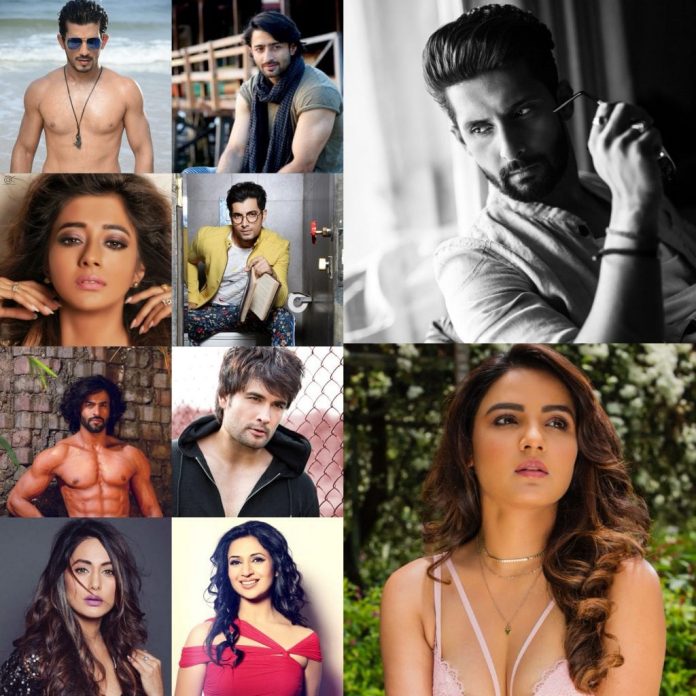 Be it their reality shows or fiction dramas, there are some Indian TV actors who are simply ruling the roost at the moment. From the dashing Ravi Dubey, who is currently hosting singing reality show Sa- Re- Ga- Ma- Pa Lil Champs to Hina Khan, the new Komolika from Kasauti Zindagi Ki 2, their popularity has been rising sky high with each and every show. Here are our favorite top 10 of the TV industry. Take a look!

Ravi Dubey: Having spent more than a decade in the industry, Ravi has always been at the top of his game, be it his first show Stree…Teri Kahaani or other projects such as Saas Bina Sasural and Jamai Raja. The actor has even conquered the non-fiction world with shows such as Fear Factor: Khatron Ke Khiladi 8, Entertainment Ki Raat and Lip Singh Battle. The actor is currently hosting Sa- Re- Ga- Ma- Pa Lil Champs, and all we can say is that he gets better with every show. Don’t you agree?

Ssharad Malhotra: Well, this one seems to be on a roll, and quite a roll it is! The actor started his career in 2004 with India’s Best Cinestars Ki Khoj and has been consistently growing. His last three shows – ‘Banu Mein Teri Dulhan’, ‘Maharana Pratap’ and ‘Kasam- Tere Pyar Ki’ did exceedingly well and his current show, Muskaan, is a favorite with the audience too. That’s what we call a stellar career. Way to go Ssharad!

Hina Khan: Whoever missed her as Akshara in Rajan Shahi’s Yeh Rishta Kya Kehlata Hai (as if that was even possible!) will surely remember this style diva from Bigg Boss. Not only did she set a fashion trend of innovative night suits in the show, she was also one to never mince her words and take a stand whenever she deemed it necessary. The actor played a rather stylish Kolomika in Kasauti Zindagi Kay 2 and is off to do films now.

Divyanka Tripathi: There is stardom and then there is stardom on Instagram and Divyanka surely seems to have aced both! The actor, who plays the role of Ishita Bhalla in Yeh Hai Mohabbatein, recently hit the 10 million mark on Instagram. For the uninitiated, the actor started her career with Banoo Main Teri Dulhan and has been leaving quite an impression on the audience with her shows. Divyanka is now exploring her talent as a host in The Voice.

Arjun Bijlani: Chocolate boy looks and a killer personality are just some of the reasons behind Arjun’s enormous fan following. The actor has been seen in shows such as Left Right Left, Miley Jab Hum Tum, Meri Aashiqui Tum Se Hi and Naagin, which was quite a game changer for him. Also, the actor has become quite a pro when it comes to multitasking. Besides being a doting dad to his son Ayaan, he has been simultaneously shooting for two shows – Kitchen Champion, which he is hosting, and Ishq Mein Marjawan, where he plays the role of Deep Raj Singh.

Vivian Dsena: It is safe to say that Vivian won many hearts with his character Rishabh Kundra in the show Madhubala-Ek Ishq Ek Junoon. The actor was also seen as Abhay Raichand in Pyaar Kii Ye Ek Kahaani, which was a roaring success as well. His current show Shakti — Astitva Ke Ehsaas Ki, where he plays the role of Harman Singh has been loved by the audience and the show has been successfully running for the last three years. What’s more? Vivian has been looking super stunning as well. One look at his social media will reveal how much the actor has groomed himself.

Shaheer Sheikh: Here is an actor, who has witnessed tremendous growth in his career. From playing the chocolaty boy Anant in Navya to Arjun in Mahabharat, the smart and suave Dev in Kuch Rang and the iconic character of Salim in Dastaan-E-Mohabbat Salim Anarkali, Shaheer has aced it all. The actor will soon be seen on Rajan Shahi’s show Yeh Rishtey Hai Pyaar Ke which is a spin-off of Yeh Rishta Kya Kehlata Hai.

Tinaa Dattaa: Who doesn’t remember this bubbly actress from the hit show Uttaran. Not only did she gain popularity among the masses, but she made a place for herself in the industry. Tinaa now has the show Daayan in her kitty.

Jasmin Bhasin: In the newer lot, actor Jasmin Bhasin surely has a lot credited to her name. She has given three hits – Tashn-e- Ishq, Dil Se Dil Tak and now Dill To Happy Hai Ji – in a row. Jasmin has played different characters and made a mark with her performance. Also, her bubbly nature and happy-go-lucky personality have made her quite the favorite in TV town!

Shashank Vyas: Jagya became a household name from Balika Vadhu and he still continues to be known for the iconic role. After Balika Vadhu, he did Jana Naa Dilse Door playing a totally different character and now playing Roop standing out in an era of women dominated showbiz.