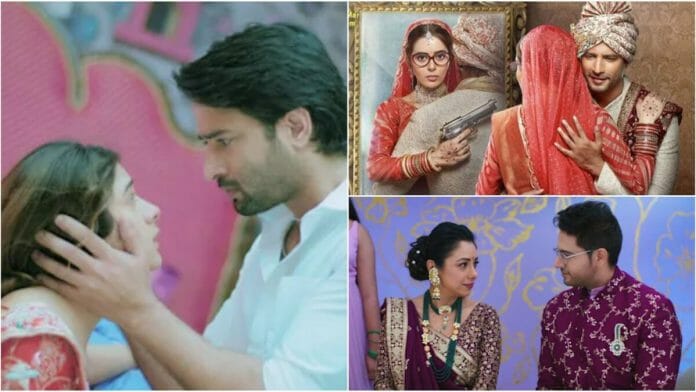 Wedding twist in these show. Which one you all are looking forward for-

Show Spy Bahu is all set for dramatic wedding twist. In the upcoming episode Yohan and Sejal will end up marrying each other. Sejal will marry Yohan to avenge for her brother’s murder. She thinks Yohan killed her brother. She entered his house and life as a spy to collect prove. Sejal will soon end up marrying Yohan under an unfavourable condition. Fans are excited for this upcoming twist in the show.

So far in the episode, Alisha is all set to marry Yohan. Sejal too gets decked up as a bride. She crosses picture of Yohan. What Sejal is upto? Keep watching the show on colors tv to know more.

Sehban Azim and playing lead in the show

Rajan Shahi’s Woh Toh Hai Albelaa will see a twisted wedding too. In the upcoming episode, Kanha will get adamant to take care of Sayuri as per his promise to Chiru. He so far brought Sayuri back home safely who was about to end her life. The twist in Kanha and Sayuri’s life will come when former will decide to marry her. Sayuri who holds Kanha responsible for Chiru’s death will get shocked. She will announce that she will never except Kanha as her husband and will never let him take Chiru’s place. How Kanha makes a place in Sayuri’s life will be interesting to watch.

Shaheer Sheikh and Hiba Nawab is playing Kanha and Sayuri in the show.

The most awaited wedding of Anuj and Anupama is all set to take place. Anupama and Anuj is gearing up for their big day. Shah family is currently enjoying MaAn’s haldi ceremony. Anuj made it special for Anupama by dedicating spices to her with a pride. Anupama gets overwhelmed seeing Anuj’s gesture. What Anuj does to make Anupama’s big day special is awaited.