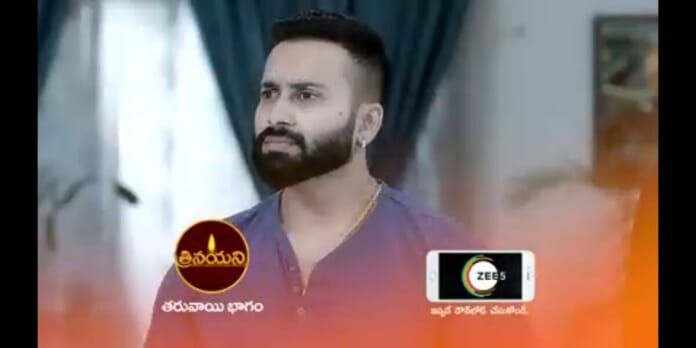 Zee Telugu’s famous show Trinayani is all set to engage its audience with its interesting storyline and twists. The lead couple Vishal and Nayani are loved by the audience. In Yesterday’s episode, We saw Vishal catching Gangadhar after he tries to kill Thilottama. The family questions him as to why he is doing this. Nayani helps Gangadhar escape by giving him hostage. Later Thilottama tells Parsu that Vishal still trysts her and sees her as his mother even though he is an enemy to her. She says death will happen for sure.

In today’s episode, we will get to see Vishal writing a complaint letter against Gangadhar. Nayani says that he shouldn’t complain against Gangadhar. Jasmine asks her whether she knows him and is trying to help him. Hasini says that Nayani knows Gangadhar and they have a huge relationship. Everyone gets shocked hearing it. She says they have a relationship of enmity. Nayani tears the complaint papers and when asked about the reason she says the Police will try to know as to why Gangadhar tried to kill her. Thilottama asks Vishal not to complain. Later Hasini asks Gangadhar the reason of him trying to kill Thilottama. He tells her that he will tell when the right time comes. Hasini leaves from there.

In the upcoming episodes, we will see Nayani searching for the suitcase that Vishal gave her. She panics and comes down. She tells everyone that the suitcase is missing. Jasmine says that Nayani kept the suitcase but she is not getting it and there is no question as to where did it go. Sumana asks her what does she mean. Jasmine accuses them saying that they are kept it for themselves.

How will Nayani prove herself innocent? What will happen if they get the money in Sumana’s room?