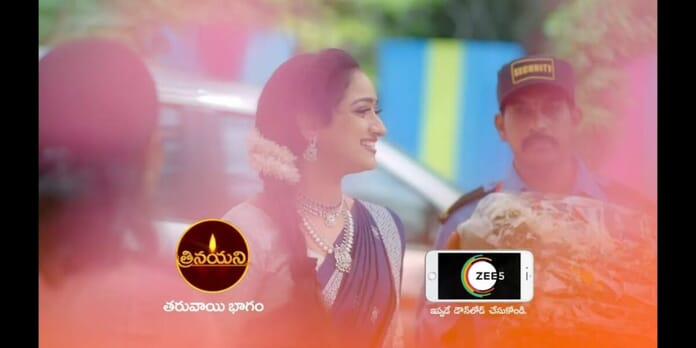 Zee Telugu’s famous show Trinayani is all set to engage its audience with its interesting storyline and twists. The lead couple Vishal and Nayani are loved by the audience. In Yesterday’s episode, We saw Vishal writing a complaint letter against Gangadhar. Nayani says that he shouldn’t complain against Gangadhar. Jasmine asks her whether she knows him and is trying to help him. Hasini says that Nayani knows Gangadhar and they have a huge relationship. Everyone gets shocked hearing it. She says they have a relationship of enmity. Nayani tears the complaint papers and when asked about the reason she says the Police will try to know as to why Gangadhar tried to kill her. Thilottama asks Vishal not to complain. Later Hasini asks Gangadhar the reason of him trying to kill Thilottama. He tells her that he will tell when the right time comes. Hasini leaves from there.

In today’s episode we will get to see Nayani searching for the suitcase that Vishal gave her. She panics and comes down. She tells everyone that the suitcase is missing. Jasmine says that Nayani kept the suitcase but she is not getting it and there is no question as to where did it go. Sumana asks her what does she mean. Jasmine accuses them saying that they are kept it for themselves. Thilottama asks Hasini to search the whole house to find the suitcase. Nayani stops Hasini. She says that she has an age-old way of catching a thief and says that if they throw black sesame to the north side the thief vomits. Nayani does the ritual. Thilottama flings the suitcase through the balcony. Nayani happily brings the suitcase inside

In the upcoming episodes, we will see a security guard opening the door for Nayani to get down from the car. Jasmine, Thilottama and Parsu get down from their car. Jasmine says that Nayani is getting treated Royally while they are getting treated like they are here for snacks. Thilottama looks upwards. Parsu asks her why she is staring upside when they are humiliated by the way they are being treated. She says that they are not seeing it. They see upside to see a man showing thumbs up to Thilottama. Parsu asks her about it. She tells him her plan of killing her. A bag filled with stones is hung by the balcony while Nayani is busy.

Will Thilottama succeed in her motive to kill Nayani? How will Nayani save herself?