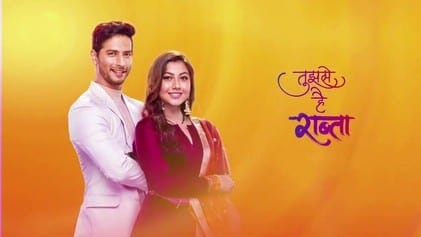 Episode starts with Kalyani asks Atharv to answer where he hidden the corpse. Atharv says your husband gonna get that body in your home. Kalyani gets tensed. Sunitha thinks she is fooling Kalyani everytime but she is unable to caught me and smiles seeing drugs packets. Aaosaheb asks Anupriya about Kalyani. Anupriya tells her that she sent Kalyani to get nariyal. Sunitha keeps drugs in saree packets and thoughts to smuggle them and thinks how she killed Manjrekar and Parmarth to finish her work.

Men bring cloth roll. Aao Saheb calls him imsude. Kalyani tells to Anupriya that Atharv hided dead body in their place. Anupriya gets shocked. Aaosaheb tells that she has got this collection for the sarees and asks the ladies to see and tell what they like. The Servant opens the cloth and find Parmath’s dead body. Meenakshi, Aao Saheb, Kalyani and others gets shocked. Malhar comes there and takes out Mangalsutra from Parmarth hand and thinks it’s belongs to Kalyani. Meenakshi in tears begs her husband to wakeup for her than she lost her consciousness. Aaosaheb asks Malhar and Sarthak to take Meenakshi to room.

Aaosaheb prays Bappa to remove Sankat from their home. Malhar shows Mangalsutra to Kalyani than Anupriya receives Mangalsutra from jeweller and she gives it to Kalyani. Manish enters Malhar home. Malhar questions who gave him permission to enter his place. Meenakshi tells him I called Manish because we found Parmarth body at your place so killer might be someone from your family and they won’t get escaped from law. Police searches every place in Malhar home.

Kalyani asks how Sunitha related to that man. Anupriya says they have to know it from Sunitha, they rushes to her room and notices that Sunitha went from home leaving letter that she don’t want to depend on anyone even though she lost her memory. Kalyani says how to prove her innocence. Anupriya tells her they will get another way. Kalyani says this time we are at mistake side. Anupriya says let’s fight for it till last moment. Inspector tells to Meenakshi that they didn’t found anything. Meenakshi tells to Malhar that it’s just starting and I won’t leave you guys until my husband gets his justice. Malhar goes to station to give his statement.

Malhar asks Kalyani to tell what’s the truth she is hiding from him. Kalyani couldn’t answer his questions. Malhar questions how her lipstick came in car and that to same car. Anupriya asks him how can he question Kalyani like a criminal and he tells to Malhar that they went to hotel on night when Parmarth is died. Malhar asks why they are proving with proof when he didn’t asked about it. Anupriya says it’s needed because you’re questioning in that way. Malhar says I can see the fear in Kalyani face and he asks Kalyani to promise on him that Aayi is correct and his suspicion is wrong. Kalyani tells him she won’t promise and you have to trust my words. Malhar leaves frustratingly. Kalyani says what happens once Malhar found the truth.