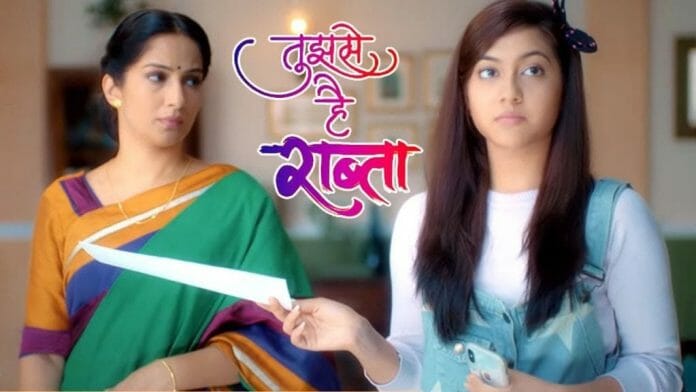 The Episode starts with Malhar falling on Kalyani and they have an eye lock. Anupriya asks why she is silent. Kalyani tells about the handcuffs and tells that whenever freedom fighters go to jail then they will have handcuffed in their hand. Anupriya says it will not come in exam. Kalyani says it will come and asks her to study. She teaches her on call. Malhar feels sleepy and lie down on bed. Kalyani asks him to get up. Malhar says I am sitting here, who said I am sleeping. He rests his head on her shoulder when he gets sleep. Kalyani asks him to get up. Anupriya stands up and says she was scared. She says I will make tea for us. Kalyani says I will make tea and asks her to study. She asks Malhar to open the handcuffs as she wants to make tea for her Aai.

Kalyani thinks last time he made laddoo and broke his own teeth, don’t know what he will do this time. They go to kitchen.
Kalyani reads about the Gandhi ji. Malhar explains to her about the britishers keeping the Indian in jail and tells about the Rowlatt Act. Kalyani asks if he knows everything. He says when he was having his IPS entrance, he went to temple and prayed to make me pass. Kalyani asks which is that temple and asks him to tell, says she will also go there. Malhar says I didn’t become ACP just like that. He adds tea leaves in the water and keeps it on the stove. Kalyani asks him not to add more. He teaches her till the tea is ready and share some good moments.

Sampada sees them and tells Atharva about it.He said let him handle Kalyani while I will handle Mugdha meanwhile. Atharva laughs and says Malhar Rane got married to kalyani twice and is teaching her history on wedding night. His destiny is bad, he lost his son and now teaching his wife.

Anupriya says such husband gets due to good luck and says he loves her so much and teaching her to make her pass. She thanks Sampada for leaving Malhar and says my daughter’s luck got better. Atharv gets up and says I will see how he will get her admit card.
Malhar and Kalyani come to room. Kalyani calls Anupriya and asks her to come to room to take tea. The electricity goes. Kalyani tells that she will bring candle. They argue. Anupriya lights the diyas and asks her to study. She says I was sure that Atharv will do something and that’s why I made diya. Kalyani says you are feeling sleepy and asks her to drink tea. She asks her to turn to look at Diya. Malhar gives tea cup in her hand. Kalyani gives tea cup to Anupriya.

Anupriya asks where is Malhar. Kalyani says he is sleeping peacefully, selling horses, made me awake and he himself sleeping, calls him selfish. Anupriya says Malhar promised Atul that he will take care of your education and says she is lucky to get such a husband. She hears Moksh crying and gets tensed. Kalyani tells Malhar that they have to do something. Sampada asks Moksh to stop crying and wakes up Atharv to put on the fuse. Sampada gets angry on Moksh and asks him to sleep.

Malhar and Kalyani come to the electric switch box and find the fuse missing. Malhar says it is done by Atharv. Kalyani tries to run hearing Moksh continuously running. Malhar stops her and she falls on him. They have a romantic moment. Malhar finds the fuse and switch on the light.

Moksh stops crying while Kalyani is back to study. Kalyani says just 3 chapters are left. Sampada puts Moksh in cradle and says she will get lean without dieting because of Moksh.
Atul sees Malhar and Kalyani standing and says good studies are going on. Malhar says I am not scared and says I don’t want him to see the handcuff. Aao Saheb tells Atul that she gave permission to Anupriya for study, but she poisoned my grand daughter’s mind. She says Anupriya had no tongue to say, but now thinking to start her life with Sarthak.

Kalyani wakes up in the morning on the floor and shouts saying it is 8:30 am. She says she has an exam at 9 am and asks him to open the hand cuff. The key falls down from his pocket in the flowers and he says he couldn’t get the keys. Malhar asks her to take out the key. Kalyani says you are accusing me of stealing the key. Malhar says I know you are smart. She says Malhar ji, remember this, I can’t write exam today even after preparing for it. He says we will get the handcuff broken and you will sit for the paper.