Episode starts with Kalyani feels sad for not finding Moksh and says Pillu gets hungry every 2 hours like her and if someone feeds him cold milk, he will get cold. Kinners console her and says they will find her Moksh. Aahir wraps Moksh in a sheet and thinks he will see who will identify him. He hears door knock, covers his face and opens door. Nurse says she came from hospital to take care of their kid. Ahir allows her. Kinner gets call from their team to inform about kid in the outside village bungalow. She informs it to Kalyani.

Pawar says to Malhar he got call from hospital and one person called their hospital for one day care taker to manage their kid and that person seems suspicious because he didn’t reveal any details about him. But that’s Girl not boy. Malhar says that’s Moksh with Ahir. Malhar asks for location. Enurches dances Infront of Aahir place. Hearing cries Kalyani signs it’s their Moksh. Aahir notices Kalyani from window. Nurse informs it’s boy not girl to hospital and Pawar informs this info to Malhar.

Nurse opens the door holding kid wrapper. Kalyani takes it from her saying Pillu but she drops it noticing doll inside wrapper. Malhar shouts Pillu. Nurse says how Ahir saw her while messaging to police and how he warned her to act to escape from the place. Malhar searches for Pillu and Kalyani joins him. Malhar gets Aahir call and Ahir warns to kill Moksh if they try another plan. Malhar says he will kill him if something happens to Pillu. Kalyani takes the phone and says they will give 2 crores. Malhar asks her where will they get 2 crores. Kalyani says her school friend Ranjith wants to help her. Malhar says he can’t take anyone help.

Anupriya infroms to family , Malhar and Kalyani going to meet Aahir without money. Aswari says they can take Kalyani friend help and why to play with Moksh help. Madhav says Malhar is right. AAO saheb says they perform Tulsi niyam for Moksh.

Sarthak doubts Aswari and asks her whether she gets call from Ahir. Madhav says Aswari can’t do anything. Aswari says it’s right to doubt her but at this point she cares for Moksh than Aahir. Malhar and Kalyani thinks why every shop is Mandi is closed. Malhar asks someone and that person informs Every shop is closed because of tulsi pooja. Kalyani says how to search Pillu in closed shops. Malhar says shops are closed that’s why Aahir choosed this place. Moksh cries loudly in Aahir arms. Hearing his cries Malhar and Kalyani searches for pillu. Ahir hides Pillu in Tulsi plant box and uses paint mark for identifying the box. 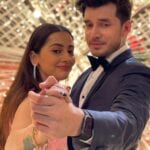 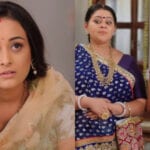