The episode starts with Fateh seeing Kushbeer apologizing to a group of people. Fateh goes to them and asks why Kushbeer is apologizing to them. A man says that Kushbeer couldn’t keep his promise of collecting funds for the hospital and blames Fateh for that. Fateh says that he isn’t only Tejo’s culprit, but also Kushbeer’s and promises to himself to sort out everything. Tejo’s family gets happy seeing Tejo smiling. Kushbeer asks Gurpreet if she talked to any marriage agency for Simran. Gurpreet denies. Fateh comes and says that he has talked to the agency as he wants Simran to settle down in her life. Kushbeer asks if he asked Simran’s opinion before. Fateh says that they both understand each other very well. Gurpreet asks Simran what she wants, Buzzo. Simran says that she trusts Kushbeer and Fateh’s decision. Kushbeer says that then he doesn’t have any objection. Fateh leaves. Nimmo taunts saying the boy’s family will run away after learning that Simran left her husband and has a kid. Biji scolds Nimmo and says that Fateh must have told everything about Simran to the agency’s people. Simran is in video call with Buzzo and worries about Kushbeer’s reaction. Fateh arrives there. Fateh and Buzzo assure Simran that Tejo will know how to handle Kushbeer. Fateh informs Tejo about their plan’s update.

In the college, Tejo gets shocked on hearing few students talking about Fateh going to fight a dangerous fighter called Thunderjeet. Tejo goes to Fateh and scolds him for wanting to fight against a dangerous opponent without thinking about anyone. Tejo angrily turns around to leave, but Fateh stops her holding her hand. Fateh says that the winning money will go to the hospital to which Kushbeer promised to collect money. Therefore it will help to get back Kushbeer’s lost reputation. It doesn’t matter if he gets beaten for that. He informs that the boy’s family comes to see Simran evening.

Virks family talk with boy’s mother. Tejo is watching this through the video call. Kushbeer asks the boy’s age and they get shocked when they learn that the boy’s age is 45. Kushbeer refuses to get Simran married to an older person. The boy’s mother taunts Simran saying she left her husband and has a kid. Kushbeer scolds them and says to get out. Fateh says that Simran won’t get any boy of her age. Gurpreet agrees with Fateh. Kushbeer says that he will get her daughter married only to a boy of her age group and leaves. Later Fateh meets Tejo and thanks her. He praises her. Angad gets angry on seeing Fateh and Tejo together. Tejo says that she won’t forgive him hearing his words. Fateh says that he understands. Tejo says that Kushbeer won’t get convinced with one boy and leaves. Fateh is confident that Kushbeer will get convinced as Tejo is with her. Angad phones Jasmine, but she doesn’t receive his call. Angad regrets joining hands with her. Jasmine is in the police station and collects the man’s belongings. She sees the man coming. Jasmine thinks that Tejo and Fateh won’t be able to understand what’s happening with them.

Kushbeer is looking boy’s photos and rejects every boy. The marriage broker says that they won’t get best match in second marriage, but there’s a boy, but his family is old fashioned and says that she will bring the family evening. Kushbeer agrees Other hand Tejo’s family talk about Kushbeer finding a match for Simran and they wish God unite Simran and Buzzo. Fateh thanks the marriage broker for helping her. Tejo sees Buzzo running and video calls Simran and shows it. Mayi wants to inform Amrik, but Simran says to not disturb him as he went for some work. Jasmine comes to the man and it’s revealed the man is Amrik. The looks at Jasmine scared.

Precap: Kushbeer rejects Buzzo’s alliance. Buzzo’s dad gets angry and says that he rejects Simran. Jasmine says that she needs to train Amrik to give surprise to Fateh-Tejo. 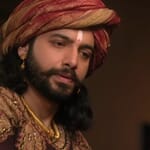 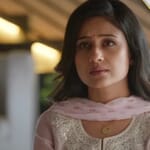 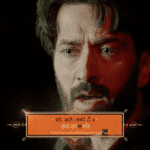 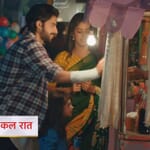