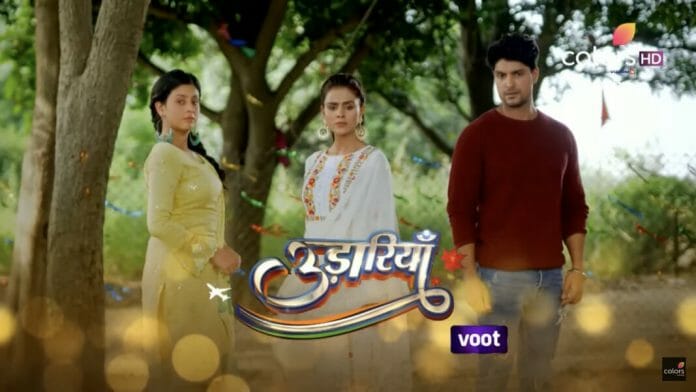 The episode starts with  Fateh taking the family to the dance stage and they are all dancing. A few goons argue with Ekam’s father and vow to take revenge on him. Naaz misses Jasmine and wishes that she could also be there. She imagines Jasmine dancing with the family. She becomes sad, realizing that it’s not true. Nehmat asks Naaz to smile and dance. She says that her parents planned a surprise for her. Naaz and Nehmat dance along with the family. The goons cut a car’s breakwire to take revenge on Ekam’s dad. Gurpreet asks Kushbeer if the wedding couple’s car is decorated. Kushbeer says that it must have done. Meanwhile, the car in which the breakwire has been cut is decorated for the wedding couple’s departure.

Fateh and Tejo give a dance performance. Fateh and Tejo get ready to leave in the car. Nehmat and Naaz are about to leave in another car. Tejo and Fateh call out to Nehmat. The latter asks Naaz to record their video. Naaz obliges. Tejo and Fateh thank Nehmat for giving them the idea of their re-wedding. They share a group hug by saying I love you. Naaz feels jealous of seeing them as a family. Nehmat gets emotional. Biji teases Nehmat. The latter is about to leave. Her duppata gets stuck with Tenors clothes. Tejo removes. Nehmat and Naaz leave in another car. Fateh- Tejo and the Virks family travel in the car in which the break is failed. On their way, the Virks are shocked to realize that the break isn’t working.

Meanwhile, the Sandhus are waiting to welcome Fateh and Tejo. They wonder why they haven’t arrived yet. Here Fateh and Tejo’s car collide with another car and meet with a major accident. There, Satti gets worried when she sees that the diya, which is lightened near the Goddess, blows up. Here Virks are lying dead. Fateh is severely injured. He reaches towards Tejo, who is also gravely injured, with a lot of difficulties. Tejo and Fateh extend their hands and, after a lot of difficulty, they hold each other’s hands. They touch their foreheads by crying. They remember their promise of not leaving their side even in death. Fateh says that even death can’t separate them. Fateh kisses Tejo’s forehead. They recall all their moments. They both die.

There, Sandhus are shocked to learn about the Virks accident. They break down in tears. Nehmat burts into tears, shouting. Naaz cries, seeing Nehmat. Naaz says to Nehmat that she’s sorry. She says that they have to take care of each other and stay with each other. She hugs Nehmat crying. The story takes a 16-year leap. A group of girls are shown dancing. Nehmat is shown running in the field, followed by Ekam, who asks her to stop. Nehmat joins that group of girls and dances with them. She runs from there. Ekam runs after her. Ekam pulls Nehmat towards him.

Nehmat and Ekam fall and roll. Nehmat is on the top of Ekam. He removes her hair from her face. Nehmat’s face is revealed. He says that he caught her. Nehmat says that he caught by cheating. He tells some filmy lines. Nehmat complains that he says old films lines. She runs from there. They both stop near the jeep which Ekam bought it in second hand. Nehmat says that it’s their first win and they should never sell it. Ekam gets sad and says that his dad is against their love story. Nehmat and Ekam are clueless why Ekam’s dad is against their love story. Ekam also mentions that his dad is against him joining in police academy. Meanwhile Ekam’s dad recalls the goons threatening and the Virks car accident. He feels guilty for it. He is scared that his children life will be spoiled if this secret comes out.

Precap: Ekam says to Nehmat to come out of her past. He says that he wants to become police officer to find out the truth about her family’s accident and why her dad got suspended.