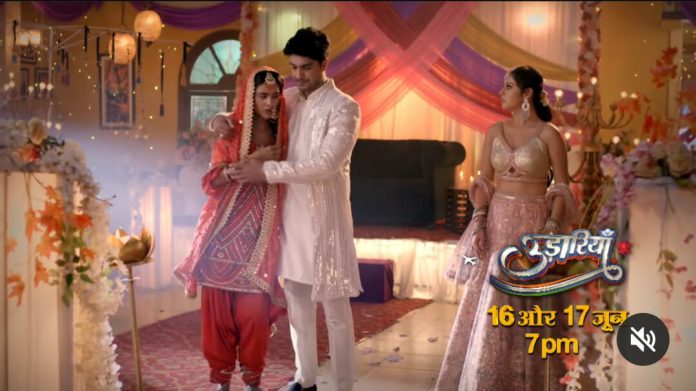 The episode starts with Aman accusing Simran of assaulting him. He says that Simran even tried to poison him, she has been trying to kill him from long time. Tejo says to the inspector that Aman is lying and he should arrest Aman for harassing Simran. She says that they have even filed an FIR on his name. The inspector says that Aman also filed an FIR against them and just before their FIR. Aman notifies that Simran’s bandaged finger and says that she got hurt on her finger while beating him.

Tejo denies it and says that she cut her fingers while cutting vegetables. The inspector asks to tell whatever they want in the police station. He asks the constable to arrest Simran. Candy comes running there. He is in tears ans asks to take his mom. Aman badmouths Simran for using child to save herself which provokes Fateh’s anger.

The latter tries to hit him. Tejo stops Fateh. The inspector warns to arrest Fateh too. Tejo tells again to the inspector that Aman is lying. But Police refuses to listen to her and arrests Simran. Candy goes after Simran crying despite Tejo trying to stop him. He asks to not take his mom away. Simran assures Candy that she will return by evening. Police drives off taking Simran. Virks look on feeling helpless.

Aman says to Tejo that he can handle Candy if she can’t do. Dadaji scolds Aman. The latter says to Candy that his mom is evil, so police took her away, she won’t return. He vows to take his son with him. Tejo says that he can never take Candy from here. But Aman is confidence of getting successful in his plan. Tejo asks Aman to stay away from Candy as he is scared of him. Aman says that he is scared of his wounds. He says that they’re fake and removes them. Tejo asks him to get out. Aman says that he will come back to take Candy. He laughs evilly and walks away.

Doctor says to Jasmine to be careful as she just suffered a miscarriage. She asks about her husband. Jasmine reacts angrily and says that he didn’t come. Here Tejo is consoling Candy. Gurpreet is in call with Kushbeer and asks to bail out Simran anyhow. He says that he is trying his best. Candy asks Tejo to promise that she will bring Simran back. Simran promises him the same. In the police station Fateh promises Simran to bail her out soon.

Jasmine recalls Gurpreet and Tejo’s words and cries hard as her all her plan got ruined. Dimple comes to Jasmine and tries pacify her. Jasmine says that she lost her last chance to enter Fateh’s life. Dimple tries to console her. Jasmine asks her to shut her mouth. Dimple says that Jasmine can shut her month, but she has to tell her family about miscarriage. Just then Tejo phones Jasmine.

Her friend says that if Jasmine doesn’t answer the call, Tejo will start looking for her and can enquire in her house. She says that her mom knows about the party. Jasmine attends the call and says that she’s still in her friend’s house. Tejo asks Jasmine to come home soon. She says that Simran got arrested. Jasmine gets shocked hearing this.

Virks and Rupy discuss about how to bail out Simran before the day end as the next two days are weekend and court won’t function. Rupy talks to the brother’s judge. Tejo, Fateh and family go to meet him. Elsewhere Aman is rejoice the success of his plan with his friends.

Precap: Jasmine decides to go to Amritsar as she doesn’t want to get insulted or get arrested. Tejo and Fateh dance in the rain. Aman provokes Fateh to hit him. Tejo scolds Aman.

The episode starts Jasmine putting up an act in front of Gurpreet to go to her friend’s party. Jasmine lies to Gurpreet that her friend, Nikki’s only brother died in a car accident and she’s no one now. Gurpreet sympathizes with her friend and agrees to let Jasmine go to her friend. She wants to accompany her. But Jasmine refuses saying that she doesn’t know how long she will stay there. Gurpreet asks Jasmine to take care of herself and the baby.

In the kitchen Tejo is kneading dough. Fateh comes to her and offers to help her. Tejo says that Fateh even learned to cook in the last nine months. Fateh cuts the capsicums. Tejo and Fateh come close. Fateh feels that he is distracting Tejo instead of helping her so, wants to leave, but Tejo asks him to stay. Fateh asks for whom she’s making vegetables. Tejo says that it’s for Tejo. Fateh looks on. Other hand Jasmine chooses a dress to wear for the party. She puts the dress in a cover and throws it out of the window. She gets excited to go to the party tricking Fateh and Tejo.