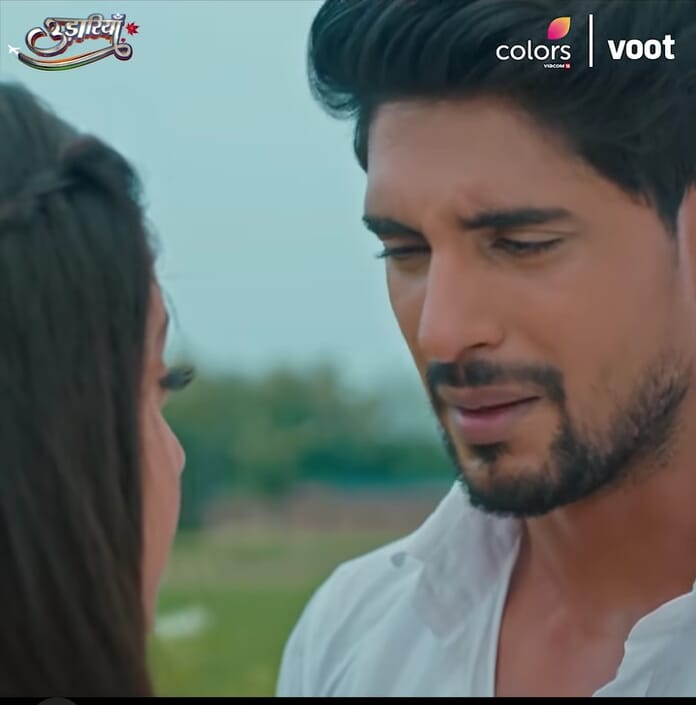 The episode starts with Kushbeer drinking the tea and Jasmine getting happy. Fateh comes there. Biji asks Fateh to have breakfast. Tejo says that she leaves for college. Biji asks Tejo to have breakfast before going. Kushbeer also says the same to Tejo. Tejo sits next to Fateh to have breakfast. Biji asks Fateh to serve parata to Tejo too. Fateh obeys. Fateh asks Tejo if she wants pickle. Tejo recalls having breakfast with in the academy. Jasmine comes and stands between Fateh and Tejo and asks Fateh to drink juice. Tejo says that she’s getting late for college. She tells Candy that she will take him back home after returning from college. Mayi asks Tejo why she didn’t leave the college yet. Tejo says that the car is repair and she’s trying to book cab. Fateh comes there and asks if he can drop her at the college. Tejo refuses. Kushbeer is playing with Candy. Suddenly he doesn’t feel good and faints. Candy comes to call and tells nanaji has fallen. Family rushes to Kushbeer. They make him lie on the bed. Fateh calls doctor.

Doctor checks Kushbeer and says that his BP got low and asks to see his medicine. Tejo shows him the medicine. The doctor asks who gaves him medicine. Tejo says that she gave him. Doctor says that maybe she gave him two tablets at a time. Tejo denies it and says he gave her one BP tablet and one multivitamin tablet. Doctor says that she might have given another BP tablet in the place of multivitamin. Tejo says that she remembers well, she gave him one BP tablet. Doctor says that his BP lowered due to overdose and this careless can risk his life and asks Tejo to be careful the next time. Doctor leaves and Fateh accompanied him till the door. Nimmo taunts Tejo. Tejo wonders how it could have happened. Biji says that Tejo is handling lot of responsibilities and made a mistake. Nimmo says that it’s not mistake, thankfully Kushbeer’s life got saved. Tejo cries. Jasmine is happy that family doubts Tejo.

Mayi asks Nimmo if she wants to say Tejo intentionally did it. Gurpeet wants to get oil to massage Biji’s foot. Tejo asks her to look after Kushbeer while she will do Biji’s foot massage. Gurpeet says that she will take care of Biji hereafter, she doesn’t want any mistake to happen again. She can’t stand any carelessness in Biji’s matter. She asks Tejo to leave before she says anything bad. Tejo leaves crying. Fateh sees this.

Tejo cries recalling Gurpeet words and says how she can prove that she hasn’t done it. Fateh comes there. Tejo asks why he has come here, she doesn’t need his shoulder to cry, she doesn’t need his compassion, she can handle to herself. Fateh says that he knows that she can handle herself like she always did. He doesn’t have rights to console even if he had the right, she doesn’t need it as she’s strong enough to face her problems alone. Tejo asks then why he has come, to say that she did the mistake. Fateh refuses and says that she didn’t do any mistake. No matter who says that she did it, he won’t believe it as she can do such mistake. He asks her to wipe her tears and goes to Kushbeer. He will serach her after gaining consciousness. Fateh leaves while Tejo looks on.

Fateh comes to Kushbeer’s room and hugs Gurpeet. Tejo comes there. Nimmo starts taunting Tejo. She blames Tejo for Kushbeer’s condition. Kushbeer gains consciousness and stops Nimmo. Nimmo says that Tejo gave him overdose. Kushbeer says that Tejo can nerver do this. Nimmo says that only Tejo speaks truth in this house and not others. Fateh silences him. Fateh asks Kushbeer to rest. Tejo asks what he will eat. Kushbeer says the soup made by Tejo. Tejo goes to get the soup. Candy comes there and talks to Kushbeer.

Jasmine comes to Tejo and says that she can cry openly in front of her, she won’t tell anyone. She should be thankful to God that Kushbeer ate one tablet extra what if he ate 10 tablets. Tejo says that it means she did. Jasmine says that if anything good happens Tejo takes the credit and when anything bad happens, she blames her. She asks Tejo to accept her mistake. Tejo warns Jasmine to expose her in front of the family and throw her out of the house. She has problem with her and don’t drag her family in between. Tejo says to Jasmine that if she repeats this again, she will expose her in front of the family and send her to jail.

Biji tells family about making arrangements for Navratri puja. She asks Tejo to make the arrangements. Gurpeet says it’s not right to put all the responsibility on Tejo. Nimmo taunts that Tejo will leave the house after six months. Jasmine smiles. Mayi asks Nimmo why she keeps taunting Tejo. Nimmo says that she feels bad for Tejo that her husband ran after first marriage and in second marriage also Fateh divorces her. She says that Tejo’s fate is bad. Kushbeer comes there and says that our fate is bad, so Fateh is leaving Tejo for the cheater Jasmine. Jasmine hears this and gets angry. He warns Nimmo that he won’t tolerate a word against Tejo. Kushbeer says that he’s fine, a mistake happened and need not to make it a big issue, Tejo will continue to give him medicine. He says to Tejo to not worry, no one can say anything to her when he’s here.

Kushbeer asks about Candy. Tejo says that Candy won’t come as his mom’s assignment got completed. Kushbeer says that Candy feels like their family and today there’s puja and without Candy, it will be incomplete. Gurpeet agrees with Kushbeer. Tejo recalls telling to Simran that they’re starting the plan’s second phase as Jasmine can expose them anytime. When Candy won’t come home, everyone will miss him that time she will tell them the truth, they will accept Simran. Kushbeer asks Tejo to call Candy and his mother for the puja. Tejo prays to Goddess to help her to unite Simran with her family. Jasmine thinks of exposing Tejo before she brings Simran home.