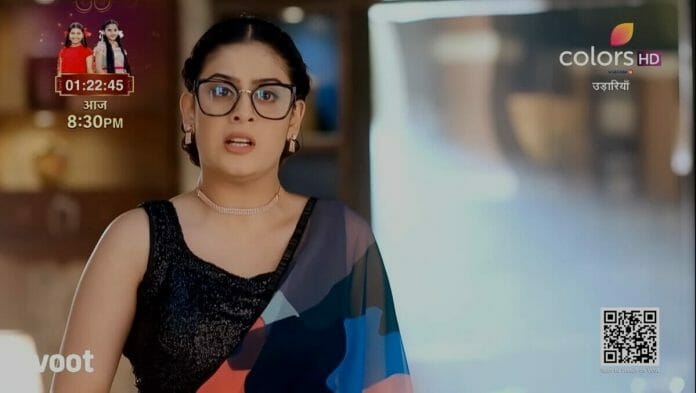 Colors TV’s popular show Udaariyaan is gearing up for more drama, with Jasmine planning something big to get Nikhil on Advait’s position.

Previously, it was seen that Shelly instigated Naaz against Nehmat, stating that her and Advait’s wedding pictures were published in the newspaper while Naaz and Nikhil’s wedding pictures weren’t published. Naaz planned to get on the good books of everyone. Naaz cooked for Nikhil his favorite continental dishes, while Nehmat cooked Indian dishes for Advait.

At the dinner table, Naaz got jealous that Nehmat got a bigger necklace than hers as a gift from Shamsher. Naaz mentioned that Ekam likes malai kofta made by Nehmat when the latter was about to serve Advait the dish. Advait got furious on hearing Ekam’s name and left the dinner table without eating.

Later, Jasmine met Naaz, who was waiting for Shelly. Jasmine said to Naaz that she had spoiled her life by marrying Nikhil. She revealed how she tried to get Naaz married to Advait by swapping brides.

In the upcoming episode, it will be seen that Advait will behave rudely to the Sandhus and will leave earlier, leaving Nehmat there. Jasmine will meet Shamsher and will reveal that Nehmat is neither Virks’ daughter nor Sandhus’.

Mallika will want to show the picture of Advait and Nehmat to the Sandhus. Nehmat will try to stop Mallika. The latter will push her harshly. Ekam will save Nehmat at the right time from falling down. Ekam will convince Mallika and will take her from there.

What will Advait know after knowing Nehmat’s real identity? Will Jasmine be successful in her intention?