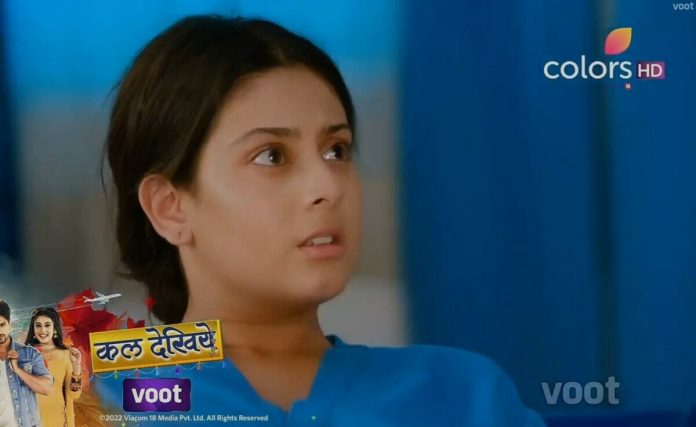 Colors much loved show is gearing up for more drama with Virks registering a police complaint against Aman.

Previously it was seen that Aman claimed to be Candy’s father. Tejo asked Aman to show proof that he is candy’s father. Aman said that he would give it to Simran in private. Virks decided to call police. Aman threatened that it would humiliate the Virks only since their neighbors would learn about Simran having Candy before her marriage.

Just then Buzzo came. Aman mocked Buzzo. Then he showed the DNA test reports. Tejo refused to believe the reports. Simran admitted that Aman is Candy’s dad, but requested to throw him out.

Fateh and Buzzo forcibly threw him out. Fateh and Buzzo wanted to register a police complaint, but Smiran didn’t want as she was scared that he would snatch Candy from him. Tejo convinced Simran.

Jasmine received her friend’s call. The friend invited Jasmine to her party. Jasmine agreed to come. Fateh and Buzzo registered a police complaint against Aman and returned home.

Simran narrated to the happy her past. She told how Aman used to torture her and how she managed to escape from him. She doubted that Aman had some hidden motive to return. Fateh and Tejo reassured Simran and promised to protect her from Aman.

In the upcoming episode it will be seen that Jasmine will manage to go to her friend’s party. Tejo will say to Fateh that she’s worried about Jasmine since she’s not answering her calls.

At the party Jasmine will have stomachache. Her friend will bring Jasmine to the hospital. Jasmine will ask doctor what the report says. Doctor will say that due heavy internal bleeding Jasmine had a miscarriage. Jasmine will look on shocked.

What will happen next? Will Fateh and Tejo find out Aman’s real motive? Will Jasmine tell the Virks about her miscarriage?