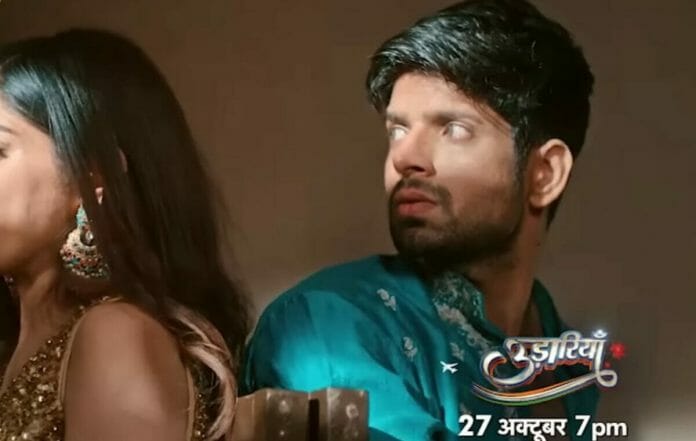 Colors’ popular show Udaariyaan is gearing up for more drama, with Advait learning about Ekam and Nehmat’s fake breakup.

Previously, it was seen that it was seen that Ekam and Nehmat confessed that they had faked their breakup to find out the reason behind Jayveer’s disapproval of their relationship. Ekam assured Rupy to convince his dad and was even ready to leave his house if Jayveer didn’t get convinced. Rupy gave his blessings to Ekam and Nehmat. Ekam took Nehmat to his house.

He revealed that he had faked his breakup with Nehmat. He begged Jayveer to tell him who wanted to separate them and who was blackmailing him. As Jayveer refused to say and to accept Nehmat as his daughter-in-law, Ekam decided to leave the house. Mallika informed Advait about Ekam and Nehmat’s fake breakup drama. Advait was shocked and plotted with his dad to separate them.

Naaz was angry that her plan to separate Ekam and Nehmat had flopped. She hatched a new plan to force Nehmat to get her help for her love. Nikhil’s friends misbehaved with Nehmat. Ekam beat them.

Later, Nikhil and his friends attacked Ekam and Nehmat. Naaz saved Nehmat and Ekam from Nikhil and revealed that Nikhil was her boyfriend, which shocked Nehmat.

In the upcoming episode, it will be shown that Advait and his dad, Shamsher, will plan to kidnap Ekam and Nehmat. Shamsher will tell his goons that Ekam will definitely come to the Diwali party organized at the Sandhus’ house and will ask them to abduct Ekam and Nehmat using this opportunity.

As Nehmat and Ekam will be happily celebrating Diwali, Shamsher’s goon will sneak into the house and will cut the electricity supply. They will put a black cloth over Ekam and Nehmat’s heads and will kidnap them.

Will Nehmat and Ekam be able to escape from Advait and Shamsher’s clutches?