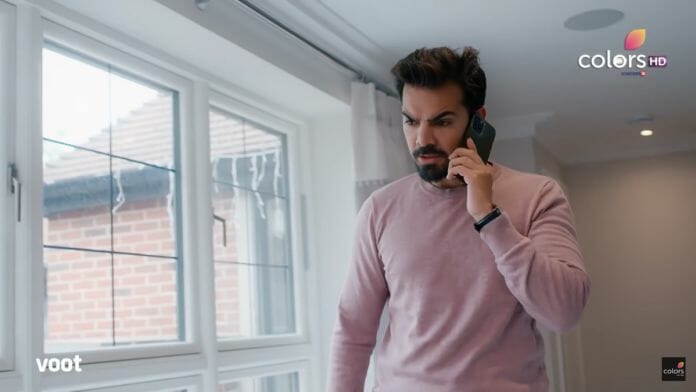 Previously it was seen that Tejo told someone in phone that it was risky, but she was ready. Angad was in call with someone. He told that person about Tejo being with him. He said that Tejo could become a threat for him so she should die. He got shocked on seeing Tejo hearing him. Tejo said that she wanted go to her house as she was feeling restless. Angad said that Fateh and Jasmine knew her house and could come to disturb her. He felt relieved that Tejo didn’t hear anything. Other hand Fateh got determined to save Tejo from Angad and was trying to find where Angad took Tejo to make her understand that Angad attempted to kill her. Amrik phoned Gurpreet and said that Fateh was with him and Jasmine in London and Tejo was alive. Gurpreet got elated on hearing this. She asked Amrik to bring Tejo home and he promised her to do the same. Later Jasmine got angry on knowing the same. She argued with Amrik and said that she didn’t want to return to India. Angad brought Tejo out to show off the world that Tejo was happy with him before killing her. Fateh followed them. He reached Tejo when she was alone and told her Angad’s truth.

In the upcoming episode it will be shown that Angad and Tejo will be in a restaurant. Angad will tell Tejo that he will let nothing happen to her until he is with her. He will ask her to see the menu card and will go to the washroom. That time Angad will a receive a message on his phone. Tejo will read it. It will be written if he had killed Tejo which will shock the latter. Tejo will immediately run from that place. Angad will look for Tejo. Tejo will see Fateh and will run towards him.

What will happen next? Will Tejo believe Fateh?

Stay tuned to this space for exclusive update of Hindi shows.