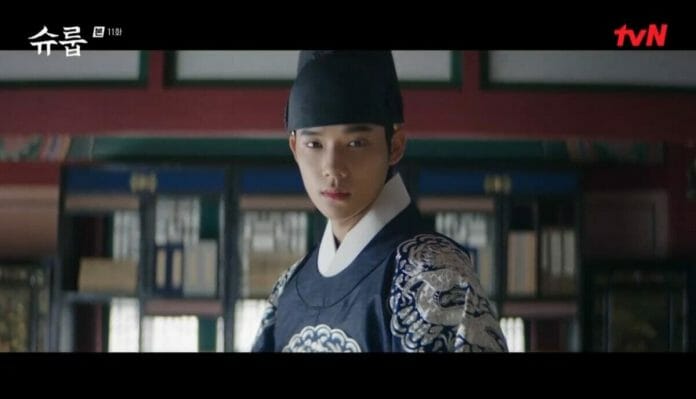 The episode starts with the scholars getting food served under tight security. The King interviews the candidates in secret and poses a question to them about what would they ask if a chance is given for them to question the King. Ui Seong questions the reason for bringing the estranged people as Ministers. Bo Gum asks about the current affairs. Seong Nam asks the King that whether he knows the bad rumors circulating around him among people. He says that the people raise their voice only when they become intolerant and brings in open about the huge taxes on people for the benefit of government officers. It was revealed that Grand Prince Seong Nam won the round. Queen Do Wager summons Minister Yoon to bring Il Jo Jeong Ran to their side and he manipulates them with wealth too. Chief State Councilor learnt about it and threatened Il Jo to expose his truth if he doesn’t side them. Il Jo changes his stand for the same. Queen gets the news through Consort Go about the results and wonders who’s leaking the results and everything from the secret place.

Chief State Councilor gets threatened when Queen Do Wager plays against Ui Seong exposing his ill treatment towards servants to the scholars. They ahd no option but surrender to Queen Do wager requesting her to side with Ui Seong. They promise higher post for the scholar’s son if they side with Ui Seong. Do Wager asks what would she get if she takes Ui Seong’s side. Chief State Councilor promises her that she would be having the real control of the top 5 Ministers. Queen Do Wager is not satisfied with the answer. Consort Hwang agrees to give up her Queen Powers to her if Ui Seong becomes the King. Do Wager summons Consort Tae and she comes with Bo Gum. Do Wager suggests Bo Gum to withdraw from the contest. Consort Tae calls it absurd and asks what promise. She recalls doing anything Do Wager asked for in return of the book. Do Wager asks Bo Gum to withdraw and mocks them for forgetting their place. She says that she never considered them for the Crown Prince contest. Consort Tae cried hard but in vain. Bo Gum withdraws his name palatte from the contest with pain while Consort Tae sits broken.

Court Lady Shin says about whatever happened and feels infurious with the foul play. Queen herself goes to the chamber and stops the food that’s about to get delivered. She notices chits in it when the security leader calls it against rules. King comes there and Queen says about her suspicion of foul play in the test. She wishes to once check the place and the King grants permission. She goes inside with few and retrieves few chits. She lashes out at them for risking the country and people’s lives for some money and confronts them about it. She says about their responsibility and asks them to fulfil it with a true heart. She burns the chits she got and decides to keepi it from the outside world. She asks them to judge basis on efficiency and not wealth and leaves. Everyone have a change of heart and they all burn their chits. Seong Nam and Ui Seong are asked similar question and both answered it right but with different perspective.

Queen summons Bo Gum and says about her decision to punish his mother. Consort Tae also got summoned. She reaches there and the Queen accuses her of betraying her and siding with Minister Yoon. She says that she could also kill her but she’s just demoting her as court maid as her punishment. She asks her to clean her chamber. She loaded her with works that she sleeps on Queen’s bed exhausted. Once she wakes up she realizes her blunder and apologized the Queen. The Queen asks if she cleared her mind after getting exhausted physically. She says that he greed has led her son to a dangerous path that it snatched his opportunity from him. Consort Tae regrets her actions and apologizes the Queen. Queen recalls Bo Gum pleading her to not punish his mother as it’s his greed that pushed her limits. Queen re promotes her and sends her to take care of her son. Consort Tae hugs Bo Gum as he breaks down in her arms. Court Lady Shin asks whether she don’t despise Consort Tae for becoming a concubine being her mere maid. Queen agrees that she did as she got to know that the King visited her chamber for her but also says that the palace would be boring without her presence.

Minster Yoon asks Do Wager whether Prince Ui Seong was the one who was in her mind as the Crown Prince from start and Do Wager agrees with his words. However, she promises that whoever becomes the Crown Prince she would make sure that her daughter becomes the Crown Princess. Chang Ha is thinking about Seong Nam and is very happy. The scholars bring their results while one already leaks it to Chief State Councilor. King is about to announce the result when Chief State Councilor stops mid way and says about the rumor of Seong Nam not being royal blood. They propose a paternity test before the reaults. Queen agrees to go ahead with it. A drop of King and Grand Prince’s blood is dropped in watera nd if the blood blends then he is King’s son and is proven to be very close to true. Chief State Councilor already dissolved poison in the water and so the blood doesn’t blend. Queen refuses to accept the result and suggests a paternity test for Chief State Councilor and Consort Hwang.

The paternity test is conducted with the same water and it was failed too. Queen says that the back ear bone of the King is slightly budged and most of his sons share the same physical difference. Physicians agree that it’s the efficient way and Queen suggests Do Wager to do the test herself. She checks Mu An, Bo Gum, Seong Nam, Il Yeong and Ui Seong. She declares that Grand Prince Seong Nam is King’s child and looks accusing at Consort Hwang after checking Ui Seong. Queen says that Do Wager was angry that she conceived during the King’s mouning period and so raised Seong Nam away from palace. However she says that she failed to clear it then due to her own reasons and regrets for it. King says he had no doubt and just agreed for court members satisfaction. Queen apologizes Seong Nam. King announces Seong Nam as the Crown Prince much to others dismay. Queen looks at Crown Prince dress and feels relieved for fulfilling her promise to her late son. Ui Seong and the trio palns to remove Seong Nam too just like they did with the previous Crown Prince. Seong Nam wears the gown.