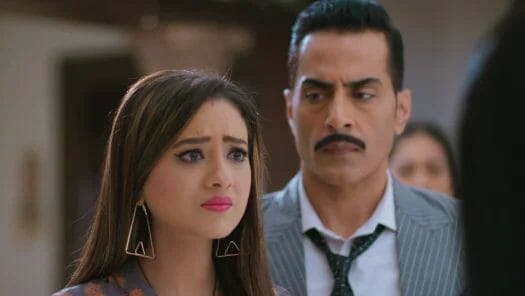 In the upcoming episode of Anupama, Shahs and Anupama will get excited to celebrate Janmashtami and Anuj’s birthday. Elsewhere, Barkha and Ankush will come up with a plan to trouble Anupama. How Anupama manages to escape Barkha and Ankush’s evil plot will be interesting to watch

Before that read out the recape of the week;

This week started with doctors performing Anuj’s surgery. Anupama stays hopeful. Barkah returns and asks Anupama for getting Anuj treated in city hospital. Anupama says to Barkha that it is not a time to argue over hospital. Ankush asks Barkha where she was. Barkha says Anuj’s accident is an opportunity for them to take over the Kapadia business and they should focus on the same. Doctor informs Anupama that Anuj has slipped into a coma.

Elsewhere, Vanraj gets well. He apologizes to Anupama. Anupama asks Vanraj to relax until Anuj is in danger. She adds once Anuj will tell the truth about cliff incident, she will not spare him. Barkha over hears Vanraj and Anupama’s talk. She tries to benefit the situation. Barkha gets adamant to send Vanraj to the jail. Anupama gives her support to Vanraj and decide to wait until Anuj regains consciousness. Anuj demands to go back home. Anupama decide to take care of Anuj at home.

Shahs and Anupama decide to celebrate Janmashtami and Anuj’s birthday. Towards the end of the week; Anupama apologize to Hasmuk and says she needs to check upon Anuj. She asks Hasmuk to go back to the home. Anupama assures Hasmuk she will call him if she needs anything for Janmashtami. Hasmuk, Samar and Paritosh leave the place. Ankush says Anupama is going overboard. He adds they need to do something as soon as possible. Barkha says on Anuj’s birthday they will give a gift to Anupama.

Anupama and Anu gets excited to celebrate Anuj’s birthday and Janmashtami. Barkha and Ankush say they will execute their plan soon. Anu asks Anupama why she prepared three crown for Lord Krishna. Anupama explains to Anu. She further tells how God punishes the bad people when they go overboard. Anu asks what if ever God forgets to punish. Anupama says than it is people on earth’s responsibility to teach them a lesson.

Ankush and Barkha put camera in Anuj’s room. Anupama allows Barkha. She asks if she is clearly visible or not. Shilpa laughs. Barkha gets furious on Shilpa and fires her. Anupama side Shilpa. She says she has a trust on Shilpa thus she is will Anuj’s nurse. Anupama add Barkha wanted to fix camera, she allowed and now Shilpa will work for them.

Barkha and Ankush get furious. Anupama apologize to Shilpa. Shilpa asks Anupama not to be sorry. She assures Anupama that she is good at her work. Anupama says she has a trust on her. Shilpa says thank you to Anupama.

Barkha talk with Ankush and says Anupama didn’t make an issue for fixing the camera. Ankush says he thought Anupama will make a big deal but she didn’t react. Barkha says Anupama is playing a mind games with her. She adds Anupama fixed the camera but didn’t allow her to fire the nurse. Barkha and Ankush decide to teach Anupama a lesson.

Vanraj asks Hasmuk about Anuj. Hasmuk assures Vanraj that Anuj is fine. Vanraj decide to meet Anuj. Paritosh stops Vanraj from visiting Anuj as Barkha will make an issue seeing him. Vanraj gets restless. Anupama along with Anu and GK prepares cake for Anuj’s birthday. Barkha and Ankush keep an eye upon Anuj’s room. Anupama thanks Barkha for fixing camera in Anuj’s room as she can see him if she isn’t around Anuj. Barkha gets irked.

Ankush and Barkha talks with their lawyer and gets the legal papers ready against Anupama. Vanraj think Anu accusing him for hurting Anuj. He gets restless. Vanraj decide to see Anuj. Leela stops Vanraj from visiting Anuj. Vanraj lie to Leela that he will not go to see Anuj. He further decides to meet Anuj. Anupama along with GK, Anu and Shilpa celebrated Anuj’s birthday.

Anupama hopes for a miracle. Vanraj worries for a truth. Ankush and Barkha get legal paper ready.

In the upcoming week; Barkha will file a case against Vanraj. Will Vanraj be able to prove his innocence. Keep watching the show to get the answer.